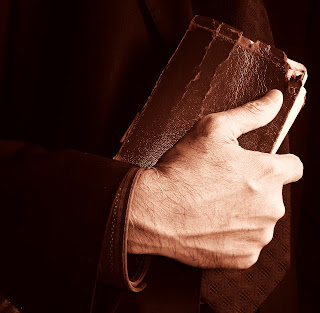 Do You discern everything You… Hear, See or Read…? If Not, Why Not…? Our “MINDS” are simply receptacles gathering in ‘ALL’ that we are exposed to. Many times we react unconsciously out of that ‘Information’ stored there, whether ‘Good or Evil’. When Lucifer rebelled against God, he took one third of the angelic realm with him. Have You read and examined the Scriptures, to know your Enemy: the Enemy of God…? [John 8:44] Do You call yourself a “Christian”…? Are You a: “Soldier of Christ” or are You: “Crippled with Apathy”…? Do You know what the Bible say about this or any issue or: “NOT”…? Do You meet with Christ Jesus in His Holy Word… “Daily” or “NOT”…? Perhaps, ‘No One’ loves You enough: to have asked these ‘Tough Questions’? Just perhaps, the Pastor of your Church has ‘NOT’…? You seem to be easily ‘upset & concerned’ by the News and terrorists. But do You defend your Faith: with the Bible…? Or can You only ‘parrot’ what your Church or Denomination preaches…?

*** (2Timothy 2:3-4-5) Join me in suffering like a good soldier of Christ Jesus.
(2Tim 2:4) No one serving in the military gets mixed up in civilian matters; for his aim is to please his commanding officer.
(2Tim 2:5) Moreover, no one [either] who is an athlete wins a prize; unless he competes according to the rules [lawfully].

*** (Romans 10:3-4) For they, being ‘Ignorant’ of God's righteousness and going about to establish their own righteousness, have NOT submitted themselves to the righteousness of God.
(Rom 10:4) For Christ is the end of the law, for righteousness: to everyone who [truly] believes.

*** (2Corinthains 10:3-to-6) Of course, we are living in the flesh, but we do not fight in a fleshly way.
(2Cor 10:4) For the weapons of our warfare are not those of the flesh. Instead, they have the power of God to demolish fortresses. We tear down arguments
(2Cor 10:5) and every proud obstacle that is raised against the knowledge of God, taking every thought captive in order to obey Christ.
(2Cor 10:6) We are ready to punish every act of disobedience [Romans 6:1-2 & Proverbs 28:13] when your obedience is complete. [1John 1:5-to-10]

Have You ‘Discerned’ how… the media defines each thing: Only according to their “Definition”…? And, how You have been sucked into their “Dictionary & Verbiage”…? The Bible defends the “Perversion & Deviance” of Homosexuality as… “Homosexuality or Sodomy!” Have kept God’s “Verbiage”… or do You now, as a ‘Professing Christian’… Now call them, “Gays?” The Bible defines Remarriage Adultery, but the World simply calls it, “No–Fault Divorce!” Of course it mentions Nothing: about “Broken Wedding Vows to Jesus!” The Bible calls Abortion MURDER of the Innocent Babies… but the world simply calls it, “Woman’s Choice!” Have You, who call the Blessed Name of Christ Jesus, spoken in the Worlds Vernacular [Definitions] or in that of GOD, to Whom we will ALL: give an account…?

*** (1Jn 4:1) Beloved in Christ, STOP believing every spirit. Instead, TEST the spirits to see whether they are from God, because MANY False Prophets have gone out into the world.

May I simply “ASK”… where do You stand: when defending the “True Faith”…? Do You know your Bible well enough to “Defend the Truth”…? Yes, against the LIES we are exposed to ‘Each & Every’ DAY…? What You don’t… “Reject Mentally”… You soon adsorb into your ‘Thinking!’ Someone once said, “Hollywood can make a movie, breaking any 5 of the 10 Commandments and then get a Grammy!” Did You ever notice how the media gets You to laugh at… “SIN/SINS”…? Over 30+ years ago, ‘Flip Wilson’ coined the term, “The Devil made me Do IT!” His laughs were applauded by ALL: both Christians and the Lost! Our society which “Mocks SIN”… and thinks NOTHING about the Over… “4,000 Innocent Babies: Murdered Each Day by Abortion!” And those who call the Blessed Name of Christ Jesus, and SAY they belong to Him: “Are Deathly Silent”…! And they continue to say, “God is Blessing America”…? … “NOT”…!

*** (James 1:13-to-16) When someone is tempted; he should not say, “I am being tempted by God,” –> because God cannot be tempted by evil; nor does He tempt anyone.
(Jas 1:14) Instead, each person is tempted by his own desire [lust]; being lured and trapped by it.
(Jas 1:15) When that desire [lust] becomes pregnant; it gives birth to Sin; and when that sin grows up [matures]; it gives birth to Death.
(Jas 1:16) Do ‘not’ be deceived; my dear brothers.
…
“Are You ‘TEMPTED?’ – 101” …Blog.
http://truth459.blogspot.com/2012/01/are-you-tempted-101-blog.html
…
Did American Christians… “Repent of their SIN/SINS” AFTER “9-11”…? What about AFTER: all the School shootings…? How many Christians speak about the Evils of the President and his “Destroying American Constitution & Sovereignty”…? And YET: You are still “SILENT”… about those “Over 4,000 Innocent Unborn Babies being MURDERD: Each & Every DAY…? Satan [1Jn 5:19] has surely crept into your ‘Mind & Heart’ with his “LIES”… and You did NOT even realize it! Tax your money and force more Government regulations on You… and the You “HOLLAR in Protest”…? What is wrong with that ‘Picture’…?

*** (Matthew 13:36-to-42) Then sending the crowds away, Jesus went into the house. And His disciples came to Him, saying, Explain to us the parable of the darnel [tares] of the field.
(Matt 13:37) He answered and said to them, He who sows the good seed is the Son of Man;
(Matt 13:38) the field is the world; the good seed are the sons of the kingdom; but the darnel are the sons of the evil one.
(Matt 13:39) The enemy who sowed them is the Devil; the harvest is the end of the world; and the reapers are the angels.
(Matt 13:40) Therefore as the darnel are gathered and burned in the fire, so it shall be in the end of this world.
(Matt 13:41) The Son of Man shall send out His angels, and they shall gather out of His kingdom all things that offend, and those who do iniquity,
(Matt 13:42) and shall cast them into a furnace of fire. There shall be wailing and gnashing of teeth. [Revelation 20:15]