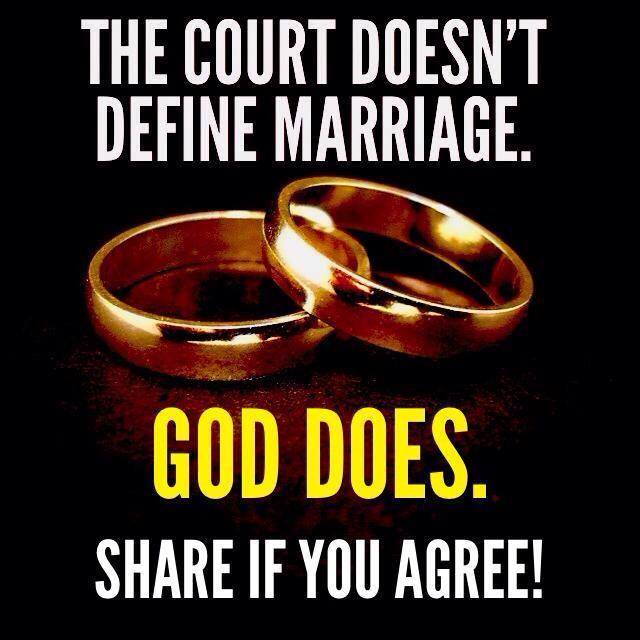 Have You noticed how our American Language has CHANGED…? Murder by Abortion, the death of the Innocent Unborn is called… “Woman’s Reproductive Choice”…! Rape is called, “Sexual Battery”…!  Homosexual is called, “Gay”…! This change is SATANIC in its origin and affects all aspects of American Society…! “Marriage” y Definition: is the union between a Man & a Woman… and NOT: two men or two women…! Political Correctness is only a Pseudonym for…. “Anti-Biblical”…! Since when is “Sexual Preference”… a basis for ‘Civil Rights’…? How long will it be for Society to give Civil Rights… for those WHO want to have Sex with Animals…? Will… “Obama Care”… pay their VETINARY care for their… “ANIMAL”…?

*** (Leviticus 20:13) If a man also lies with mankind, as he lies with a woman, both of them have committed an abomination. They shall surely be put to death. Their blood shall be on them.

*** (Leviticus 18:22-25) You shall NOT lie with mankind as with womankind. It is Abomination to God.
(Lev 18:23) And you shall NOT lie with any animal to defile yourself with it. And a woman shall NOT stand before an animal to lie down to it. It is a Perversion.
(Lev 18:24) Do NOT defile yourselves in any of these things. For in All these the nations are Defiled, which I [GOD] cast out before you.
(Leviticus 18:25) And the land is Defiled. Therefore I [God] visit its WICKEDNESS on it, and the land itself: “VOMITS” out those who live in it.

*** (Romans 1:17-to-27) For in it the righteousness of God is revealed from faith to faith, as it is written, "The just shall live by faith."
(Rom 1:18) For the wrath of God is revealed from Heaven against all ungodliness and unrighteousness of men, who suppress the truth in unrighteousness,
(Rom 1:19) because the thing which may be known of God is clearly revealed within them, for God revealed it to them. [Psalms 98:2]
(Rom 1:20) For the unseen things of Him from the creation of the world are clearly seen, being realized by the things that are made, even His eternal power and Godhead, for them to be without excuse.
(Rom 1:21) Because, knowing God, they did not glorify Him as God, neither were thankful. But they became vain in their imaginations, and their foolish heart was darkened.
(Rom 1:22)  Professing to be wise, they became fools
(Rom 1:23) and changed the glory of the incorruptible God into an image made like corruptible man, and birds, and four-footed animals, and creeping things.
(Rom 1:24)  Therefore God also gave them up to uncleanness through the lusts of their hearts, to dishonor their own bodies between themselves.
(Rom 1:25) For they changed the truth of God into a LIE, and they worshiped and served the created thing more than the Creator, who is blessed forever. Amen.
(Rom 1:26) For this cause, God gave them up to dishonorable affections. For even their women changed the natural use into that which is against nature.
(Rom 1:27) And likewise also the men, leaving the natural use of the woman, burned in their lust toward one another; males with males working out shamefulness, and receiving in themselves the recompense which was fitting for their error.

*** (Ezekiel 3:18-to-21) When I [God] say to the wicked, You shall surely die; and you do Not give him warning, Nor speak to warn the wicked from his wicked way, to save his life; the same wicked one shall die in his iniquity; But I [God] will require his blood at your hand. [Jude 1:3-4]
(Ezek 3:19) Yet IF you warn the wicked, and he does Not turn from his wickedness Nor from his wicked way, he shall die in his iniquity; But you have delivered your soul.
(Ezek 3:20) And when the righteous turns from his righteousness and commits iniquity, and when I [God] lay a stumbling block before him, he shall die. Because you have Not given him warning, he shall die in his sin, and his righteousness which he has done shall Not be remembered; But his blood I will require at your hand. [1Corinthains 11:30]
(Ezek 3:21) But IF you warn the righteous so that the righteous does Not sin, and if he does Not sin, he shall surely live because he is warned; Also you have delivered your soul.

Have You notched HOW the TV Programs use the… “Homosexual Agenda”… in their “Sit-Coms”….? And then DESGUISE their LIES… with “Canned [Pre-Recorded] Laughter”…? Remember if Satan can get You to Mock God’s Holy Standard with Laughter: He has Re-Programed your Thinking…. Without You even realizing IT…! The programs often MOCK God’s Holy Standard…. “RE-Labeling it… “Homo-Phobic”…! Perhaps they Willingly Missed…? *** (Leviticus 18:25) And the land is Defiled. Therefore I [God] visit its WICKEDNESS on it, and the land itself: “VOMITS” out those who live in it.

*** (Jude 1:3-4) Having made all haste to write to you about the common salvation; beloved, I had need to write to you; to exhort you to ‘Contend Earnestly’ for the [True] Faith; once delivered to the saints.
(Jude 1:4) For some people have slipped in; among you unnoticed. They were written about long ago as being deserving of this condemnation; because they are ungodly. They turn the grace of our God into uncontrollable lust and deny our only Master and Lord, Jesus Christ.

Many times I changed the Channel…. Or turned OFF the Video… because I was seeing the AGANDA… going from Bad to Worse…! Have You developed that Self-Discipline…? Remember the gateway to the Heart… is through the Mind…! That is Simply why we have theses Bible verses in the Scriptures…!

… *** (2Corinthains 10:3-to-6) Of course, we are living in the flesh, but we do not fight in a fleshly way.
(2Cor 10:4) For the weapons of our warfare are not those of the flesh. Instead, they have the power of God to demolish fortresses. We tear down arguments
(2Cor 10:5) and every proud obstacle that is raised against the knowledge of God; taking every thought captive in order to obey Christ.
(2Cor 10:6) We are ready to punish every act of disobedience [1Jn 1:5-to-10 & Proverbs 28:13] when your obedience is complete.

*** (1Corinthains 11:30) That's why so many of you [Christians] are WEAK; and SICK; and a considerable number are DYING.