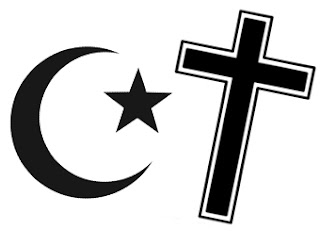 *** (Ephesians 6:12) For we “Do Not” –> wrestle against flesh and blood: –> but against Principalities: – > against powers: –> against the world's rulers of the darkness of this age –> against spiritual wickedness: in high places.

Did ‘You’ know… when “Adam & Eve: disobeyed God”… they lost their ‘human’ God given; control of the earth? God cursed the earth and the human race because of their disobedience to Him. But in His infinite… “Mercy & Love & Grace”… He provided a solution! Christ Jesus the Passover Lamb of God! But mankind has always, like Cain; wanted his own works to earn them: a place before God. Cain killed Abel… because his works were put to ‘nothing’… by the ‘obedient’ sacrifice of Abel. Today mankind has his own religion… in direct rebellion to the revealed Holy Word of God. This “Religion” is… “Man inspired and Demonically driven!” Behind all religions and political movements are… “Demonic Forces!” Did ‘You’… ‘Read & Understand’… those Bible verses above…? Do they indicate a human force… or a ‘Demonically’… “Inspired & Driven” -> “One”…?

*** (Romans 2:4-5-6) Or do you despise the riches of His kindness, and the forbearance and long-suffering: –> not knowing that the kindness of God leads you: –> to “Repentance?”
(Rom 2:5) But according to your hardness and your impenitent heart; do you treasure up wrath for yourself in a day of wrath and revelation of the righteous judgment of God,
(Rom 2:6) Who will render to each according to his works; [Ecclesiastes 12:13-14]

*** (Acts 19:13-TO-19) Then some Jews who went around trying to: drive out demons –> attempted to use the name of the Lord Jesus on those who had evil spirits, saying, "I command you by that Jesus whom Paul preaches!"
(Act 19:14) Seven sons of a Jewish high priest named Sceva were doing this.
(Act 19:15) But the evil spirit said to them, "I know Jesus, and I am acquainted with Paul, but who are you?"
(Act 19:16) Then the man with the evil spirit: –> jumped on them, got the better of them, and so violently overpowered all of them: –> that they fled out of the house naked and bruised.
(Act 19:17) When this became known to everyone living in Ephesus, Jews and Greeks alike, fear came on all of them, and the name of the Lord Jesus began to be held in high honor.
(Act 19:18) Many who became believers: –> kept coming and confessing: –> and telling about their practices.
(Act 19:19) Moreover, many people who had practiced occult arts: –> gathered their books and burned them –> in front of everybody. They estimated the price of them and found they were worth 50,000 silver coins.
(Act 19:20) In that way, the Word of the Lord –> kept spreading and triumphing.

“Crippled by ‘Religion’ – 101”
http://truth459.blogspot.com/2011/11/crippled-by-religion-101.html
…
Please tell me…? Is Islam “ONLY”… a human “Political/Religious” movement …OR… a “Demonically Inspired” movement…? Is “Allah” god [small–g] and Mohammed his prophet… OR… is “Jehovah the ‘Only’ GOD”…? There are “Only ‘TWO’ Religions”…! The one is a Relationship with God… by the Finished Work of Redemption: by “Christ Jesus”..! All ‘Others’ are the Human, demonically inspired works… ‘Earning’ their way to God: which is “Impossible!” How can a finite sinful human being… ever meet the ‘Requirements’ of the “Only Holy Infinite God”…? They “Cannot!” Mankind has always been trying to please God… but his own way… and ‘Not’ according to the Holy Word of God! That is how the Catholic Church, has duped so very many. Catholics hold only to ‘Catholic Teaching’… and “Not” to the Bible: the Holy Word of God! Simple… either God’s Way… or your own way! All other human effort is demonically inspired. Oh yes, before one starts blaming demons for… “All SIN”… perhaps open your Bible and… “Read Out Loud”…  “Romans 6:16” & “James 1:13-to-16”…?

*** (John 10:1-to-8) "Truly, truly I [Jesus] tell you, the person who does ‘Not’ enter the sheepfold through the gate: –> but climbs in by some ‘other’ way [religion] : –> is a thief and a bandit.
(John 10:2) The one who enters through the gate; is the shepherd of the sheep.
(John 10:3) It is to him the gatekeeper opens the gat; and it is his voice the sheep hear. He calls his own sheep by name and leads them out.
(John 10:4) When he has driven out all his own, he goes ahead of them, and the sheep follow him because they recognize his voice.
(John 10:5) They will never follow a stranger, but will run away from him because they do not recognize the voice of strangers."
(John 10:6) Jesus used this illustration with them, but they didn't understand what he was saying to them.
(John 10:7) So again Jesus said, "Truly, truly I tell you, I am the gate for the sheep.
(John 10:8) All who came before Me are thieves and bandits, but the sheep did not listen to them.

Now here are… interesting internet links about Islam. I would even have you look at the one, where ‘Salman Rushdie’ was threatened with ‘DEATH’… for publishing a book about Islam… mocking its religion as ‘False’. In this modern day… how could a ‘civilized religion’… place a ‘Death Bounty’ on another human being? Could not “Allah”… Himself… Kill Salman Rushdie? He has to have his ‘Religious Leaders’ proclaim his death? How then can Islam… be a religion of “Peace?” It cannot! “Death to All Infidels!” “Convert to Islam… or Die!”

Final note and comment…! I simply ask you to examine these facts. Test them not only with these internet references. Go to ‘other’ encyclopedia references. Do not believe me without checking these facts. Follow the Historical Time Line.

Even after ‘You’ know all this information… there remains… “Only One Issue”…! Is Christ Jesus [Messiah]… the ‘GOD’ He claimed to be… OR… is “He a: -> LIAR”..? It is most important when sharing with a Muslim… that ‘You’ distinguish just “Who”… ‘You’ speak about when using the name… “Jesus!” The Jesus (pbuh) of Islam… is “NOT” the Christ Jesus [Messiah] of the Bible. Often times, the Christian is confused… because they do “NOT” realize this… “FACT!”  The Christ Jesus [Messiah] is God… in the flesh. [Colossians 1:12-to-19]. The Muslim will often use ‘Jesus’… without the (pbuh)… and the Christian is ‘duped’ into thinking the Quran and the Bible are alike. That is a Lie, straight from “Demons”…!