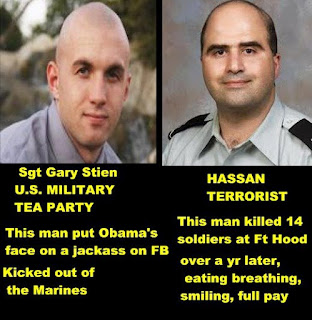 *** (2Corinthains 5:10) For we must all appear before the judgment seat of Christ, so that each one may receive the things done through the body, according to that which he has done, whether good or bad.

Is the Death of any person or group… “Any More Important”… than that of any other Today…? “Yes or No”…?

Do ‘You’ have God’s perspective… from His Holy Word about “Life & Death”…? Obvious “NOT”…! If ‘You’ did, then there would be “No Shock” about this ‘Supposed Tragedy!’ Why would I make such a statement about ‘Death’…? Because ‘You’, like so very many others… have been “Crippled” by the news media. Say it isn’t “So”…? Did ‘You’ see the picture used for this Blog? Why then did ‘YOU’… “Remain Silent”… about the “Ft. Hood Massacre”…?   Only for a few days; was there media mention of this… “Terrorist Attack” again on US Soil…! Did ‘You’ miss the FACT… that a US Army officer… who was a “Muslin Extremist”… Murdered American Soldiers on US Property…? Of course our government “Cover UP”… deemed it ‘Workplace Violence’ and “Squashed” many of the News Reports! The FBI knew about this… “US Army Muslim Extremist”… and did ‘Nothing’ about it. Did some congressional members afterward call for: “Public Gun Control”…? Absolutely NOT! Why then are some calling for more… “Gun Control”… NOW… after this incident…? But of Course… the Imam Obama wants to… “Further Destroy”… the Constitution Freedoms of our nation! Ammunition prices have ‘Doubles’ since the Imam Obama has taken office! Once Again… “You”… the ‘Stupid American Public’…have been “Duped by LIES!”

*** (Proverbs 29:25) The fear of man brings a snare; but whoever puts his trust in the LORD Jehovah; shall be safe.

“Do You ‘Believe’ the = N.E.W.S – 101”… Blog.
http://truth459.blogspot.com/2011/09/do-you-believe-news-101-blog.html
…
What about the Waco Texas… murder of “Civilian Americans”… by US Soldiers & Law enforcement? Or the many “School Shootings”… that have taken place since the Columbine High School, Littleton Colorado…? What about the “35-40,ooo” Americans killed on our highways each year…? Or the Millions killed by “SMOKING” related health problems…? Or those ‘Thousands’ killed in “Drug Related Deaths”… either by ‘Overdose or Sales’… of Illegal Drugs including Marijuana…? ‘You’ like many other Americans… have been “Crippled” by the amount of “Dis–Information NEWS”… ‘YOU’ allowed to ‘Corrupt’ your… “Cognitive Reasoning Processes”…! Do ‘You’ Not See that there is an “Agenda”… to keep ‘You’… from the Truth…? Especially that Truth found in the Holy Word of God…!

Are ‘You’ ready to meet the Immediate Judgment of God… at your death… whenever it happens? One cannot live properly without that “Holy Fear of God”. But with all these unforeseen deaths… there is a “Group”… who is “More Important”…! It is that ‘Group’ of… “Innocent Unborn Babies”… Killed by Abortion… by their American Mothers! And ‘You’ still say… “God Bless America”…? How can ‘You’ say that; when our ‘Nation is Cursed’…? The ‘Unrepentant’ actions by those who… “Falsely calls themselves: Christian?” From 3500 to 4600 Innocent Unborn Babies are killed… “EACH DAY”… By Abortion…! MORE than were killed in one day… by that “9-11” Terrorist Attack in NYC! How many were killed in that Colorado movie theater? Were any of them… “Innocent Unborn Babies”…? Do ‘You’ now see… “Your JADED Perspective”… about ‘Life & Death’? It has been warped by the “Liberal News Media”…! ‘You’ morn for the movie goers ‘wounded & killed’… but ‘Absent’ from your thinking are the… “Innocent Unborn Murdered by Abortion!”

*** (Luke 3:8) Therefore bring forth fruits worthy of repentance; and do not begin to say within yourselves; We have Abraham for our father. For I say to you that God is able to raise up children to Abraham: from these stones.

Repentance – 101 Blog  [1/6]
http://truth459.blogspot.com/2010/09/repentance-101blog-1.html
…
Don’t You realize that God… allows wicked evil rulers… to spank a disobedient people who say they belong to Him…? Surely He did not restore His people Israel after their return to the land after the “70 year” Babylon captivity. Why would ‘You’ think that… He should bless our nation…? Especially after so very many that say they “Know HIM”… are so very Silent about Abortion…? The Wholesale MURDER… of the Innocent Unborn…?

*** (Amos 4:10) I [God] have sent among you the pestilence after the manner of Egypt: = your young men have I slain with the sword, = and have taken away your horses; and I have made the stink of your camps to come up unto your nostrils: yet have you not returned [REPENTED] unto Me, says the LORD.
…
Abortion Provider Speaks
http://www.youtube.com/watch?v=mXZCOaRVrbg&feature=my_favorites&list=FLfWdxa8bxfYcut50nIJrcSQ

Do ‘You’ know Christ Jesus as your Lord & Savior…? Or just perhaps You have been only religious…? Can ‘You’ take His Holy Word, the Bible and defend… ‘What & Why’… ‘You’ believe: ‘What You Believe’…? If ‘You’ cannot… just perhaps ‘You’ have “Never been: Born Again by His Holy Spirit”…? Remember just knowing ‘About’… “Jesus & the Bible” is… “Not Saving Faith!”