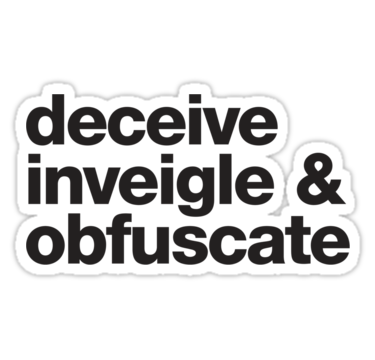 To Obfuscate is to produce a “LIE”…. To Hide the Truth! It is one of those .50 cent words that is used as NOT to one a LIAR….! Attorneys use such Tactics! But in Fact, Any LIE: is NOT the TTRUTH…! Simply look at all that Female Hair Dye products…. used by the Females….? Pretending when One is something thy are Really NOT… is a LIE, even though it may be called an Obfuscation! Abraham Lincoln stated it quite Accurately!

During my work life: I worked as a Field Service Engineer [Non-Degreed]… for over 5 years, traveling ‘domestically & internationally’. My company awarded me that Title for the position I filled. My years of Experience in the Nuclear Field [7], USAF Electronics [4], Industrial & Process Engineering Electronics [8], Governmental Environmental ‘EPA’ [8] and Others [15] gave me the background I needed to fill the Position. Most of the Process Engineers who used our Equipment, were Crippled by their Engineering Schooling “Only ONE Problem Mindset!. Most of the time, the Problem was Not ONE: but a series of 3-to-5 that affected the Engineering Process to Circuit Boards & Silicon Wafers used in the Computer industry. Most problems in LIFE…. Seem to be Inter-related to “Ancillary Problems” and NOT to just one thing!

*** (Proverbs 12:22) Lying lips are Abomination to the LORD: but they that deal truly are his delight.
*** (John 8:44) You belong to your father the Devil; and ‘You’ want to carry out the desires of your father. He was a murderer from the beginning; and has never stood by the Truth; since there is “No Truth” in him. Whenever he tells a Lie, he speaks in character; for he is a Liar and the “Father of LIES!”

For those of You who are Students of His Holy Word…. especially the OT: You know as Israel Rebelled against the LORD, HE Permitted Evil & Wicked rules as a WAY to Punish [Spank] HIS Disobedient Covenant Peoples Israel…! Both “Ahab & Jezebel”….were Prime Examples of such LIARS…! So too…. America which Falsely Claims to Know GOD: IS SILENT about the Abomination of Abortion, the Murder of the Innocent Unborn Children…. Within their American Mother’s Womb….! President Obama, is a Proponent of Abortion, Homosexuality and those ABOMINATION…. That are a Curse on our Nation…!

*** (1Corinthains 11:30) That's why so many of you [Christians] are WEAK; and SICK; and a considerable number are DYING.

*** (Amos 4:10) I [God] have sent among you the pestilence after the manner of Egypt: = your young men have I slain with the sword [War], = and have taken away your horses; and I have made the stink of your camps to come up unto your nostrils: yet have you NOT returned [REPENTED] unto Me, says the LORD.

… *** (1Corinthains 5:11-12-13) But now I am writing to you to STOP associating with any so-called brother IF he is sexually immoral, greedy, an idolater, a slanderer, a drunk, or a robber. With such a person you must even stop eating.
(1Cor 5:12) After all, is it my business to judge outsiders? You are to judge those who are inside, aren't you?
(1Cor 5:13) God will judge outsiders. "Put that wicked man away from you.".