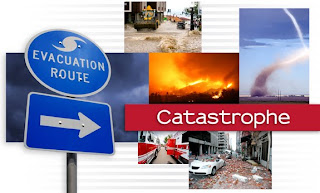 Surely all of us… have heard about the earthquake and related human tragedies in Haiti? But should that be our concern…? IF you will just take some time to read this blog, perhaps you will have a different “Cognitive Approach” to the ‘real’ facts and concerns. These facts and what ‘really happens’ in such situations, needs to be addressed, without the emotion of the moment. First allow me to ask, “Do you believe everything you hear on the ‘news’… or do they have an ‘agenda’… they want you to believe…?” Will you allow your ‘emotions’, to rule your thinking…?

Mankind is 'wrongly' led to believe… that God, the God of the Bible, is “Not” in control. All that happens here, is only by a mere ‘happenstance’ of natural occurrences’. Nothing could be further… from the “Truth”. When we are born, we are surely, to die. Nothing in life is guaranteed and all happens as a result of the ‘actions or non-actions’ of others. If you are truly born again by the Holy Spirit of God and are truly a Christian… then it is for you to ‘trust’… what God has said in His Word, the Bible. If you are ‘not’ His child, then you are ruled with… the ‘whims’ of this worlds ‘circumstances’.


During, “9-11”… I was in Indianapolis Indiana… on a business trip. They calling for Blood donations and the blood banks were so overflowed, so that they had to turn people away. Did you know human blood can only be kept for ‘30-days?’ Much of that collected blood was sold to ‘plasma & research’ businesses. How about what happened in other cities, throughout this country? They were turning away people also… but you ‘never’ heard about this blood collection travesty, ‘did you?’


All the donations… for the victims of “9-11” were in excess of Ten Billion Dollars. Yet each one of received a little over one million dollars. All the private and corporate and insurance compensations were… ‘Never’ accounted for. Do you suppose that all the “Donations”… reached the victim families…? “Absolutely Not!” Only one day did I see a news article about the ‘supposed fraud’… and then no more. Yet they were still accepting donations from all sources for some time. It made people… feel good inside… to give… even without knowing where the monies went to…?


How about the Tsunami… that rocked Malaysia in 2004? We all saw the videos and many donated to that cause. But did you ever hear about… ‘An Accounting’ of those donations…? Surely the USA played a big part in the help provides to that area, as we always do. Remember we are only… ‘One Country’… of the “G7 Nations”, the wealthiest nations group. But what about the funds from the other nations, did you ever hear about their… donations of help…?


This week, John Travolta… flew aid from here in Florida to Haiti. Of course he belongs to the Church of Scientology, which is not really a church. He did it as an outreach because the number of Scientology memberships is diminishing. But what about all the other aid from ‘other private groups’, which were already… flying relief, from Florida to Haiti…? Only the local news here, carries ‘those’ stories. But what about the source supply chain. How is all that donated foodstuffs, water and supplies… going to reach into Haiti…? What emergency plan is in place by those countries? …”None!”


What about those other Countries… bordering the Gulf of Mexico and the Caribbean Sea? Yes, even the Dominican Republic, which shares the same Island…? Have you heard… any news… on their donations to Haiti? ‘Only’ the complaints of… “Why is it taking so long for aid to reach the people?” The ‘media’ has turned this tragedy into a ‘circus’. Just take a moment and figure out where the population demographics of that nation is, in relationship to their airports. Even that was damaged in the earthquake.

Do you have a Plan…? Those who live in California, are told by their state to have an “Earth Quake Plan & Supplies!” Living here in Florida, to too we are told to make preparations for Hurricanes. Those living in cold isolated areas, make plans with back-up generators, for when the power lines are down and they have ‘no electricity’, for a week or 10-days. When I traveled for work, I always had a suite case ready to go, on a moment’s notice. Please allow me to ask you… have you ‘pre-planned’ for the… “Catastrophe”… in life…? “Yes or No”…?

There will be a “Tribulation”… that will come upon all mankind that you cannot imagine! These small disasters will pale in comparison. Most it will take unawares and will be consumed by it. Each one’s soul will be tried… and those trials will reveal whose side you are on. Satan will have almost unlimited power and will fight against God’s People… but will not succeed.

What would “Jesus Do”…? Some have criticized me for a statement I mad about the relief to Haiti. Do you suppose that ‘Christ Jesus’ would help them…? That question is ‘not’ even worthy of a response… for it is founded in “Secular Humanism”… and NOT in Biblical Christianity. No, I am “not saying”… that we are not ‘to pray’ for the Haitians. But what about those, “Children in Africa” that are being Killed Daily… in those political conflicts. Are they any ‘less worthy’ of our ‘prayers’? You see the Media has given us a… “Jaded Approach to the News!”

I simply tell YOU… the real issue here is what the News… is “NOT” telling us. Did you know that there have been over… “Fifty Million, ‘50,000,000’ = Innocent Babies = KILLED in their Mother’s Womb… by Abortion!” What about those in Haiti or Malaysia or in Africa... killed by famine, earthquake, pestilence and the like…? They are “NOT”… the real issue here! It is the… Continued Killing of Innocent Babies… in their mothers’ womb… By ABORTION! That is the only issue here… and ‘not’ the aid of our country to ‘Others’…!


The Blood of those… “MURDERED INNOCENT BABIES”… “KILLED BY ABORTION”… In their “Mothers’ Womb”…which is the ‘real issue’. We a nation blessed by God… is being Cursed by God… as the Blood of those “50-000,000” = 50-Million Innocent Babies… cries out against our Nation. And you worry about those in Haiti, or Africa or somewhere Else…?

Perhaps it is TIME… to clear our Spiritual Calendar and start to… “Pray for Repentance”… ‘For Our Nation’… and its Sin of Abortion… the Murder of the Innocents? Simply examine your … ‘mind and heart’… and start to pray… about our home country and its problems… that are a direct result of our… NOT SAYING ANYTHING… about those “Innocent Babies”…. KILLED by ABORTION… In their MOTHERS’ WOMB…? ? ? Are our... “Fifty Million Murdered Innocent Babies”… more that... the 20-thousand killed in… Haiti?