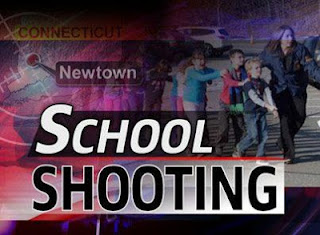 Chicago Tribune NEWS: The massacre of 26 children and adults at a Connecticut elementary school elicited horror and soul-searching and raised more basic questions about why the gunman, a 20-year-old described as brilliant but remote, would have been driven to such a crime and how he chose his victims.

*** (Job 2:9-10) And his wife said to him, Do you still hold to your integrity? Curse God and die!
(Job 2:10) But he said to her, You speak as one of the foolish ones speak. What? Shall we receive Good at the hand of God; and shall we not receive Evil? In all this; Job did Not sin with his lips.

*** (Mathew 5:45)  so that you may become sons of your Father in Heaven. For He makes His sun to rise on the evil and on the good, and sends rain on the just and on the unjust.

*** (Genesis 6:5) And the LORD Jehovah saw that the wickedness of man was great in the earth; and every imagination of the thoughts of his heart was only evil continually.

*** (2Timothy 3:1-to-7) You must realize, however, that in the last days difficult times will come.
(2Tim 3:2) People will be lovers of themselves, lovers of money, boastful, arrogant, abusive, disobedient to their parents, ungrateful, unholy,
(2Tim 3:3) unfeeling, uncooperative, slanderous, degenerate, brutal, hateful of what is good,
(2Tim 3:4) traitors, reckless, conceited, and lovers of pleasure rather than lovers of God.
(2Tim 3:5) They will hold to an outward form of godliness but deny its power. Stay away from such people.
(2Tim 3:6) For some of these men go into homes and deceive foolish women who are burdened with sins and swayed by all kinds of desires.
(2Tim 3:7) These women are always studying but are never able to arrive at a full knowledge of the truth.

*** (Proverbs 29:25) The fear of man brings a snare; but whoever puts his trust in the LORD Jehovah; shall be safe.

What they did “NOT tell YOU”… was that Americans BUY… Over FOUR TRILLION Dollars each year of ILLEGAL DRUGS, including Marijuana…!

What they did “NOT tell YOU”… was that Sexual Perverted PREFERENCE does NOT give Minority Status & Special Legal Status… ‘To Humans!’

For those of ‘You’, who do ‘Not’ know history… “One of the Caesars of Rome”… had a “Horse”… as his “Domestic” partner! “The Roman Emperor Gaius Julius Caesar Germanicus (or just 'Caligula') lived between 12–41. AD” History if filled with such references of perversions; which were followed by the “Fall” of those nations.

What they did “NOT tell YOU”… that OVER 40,000+ Americans die on the Highways each year, and THOUSANDS of more are Permanently Injured for their LIFE. Yet the Cars did NOT kill or injure those People… The Drivers DID! Should CARS be banned…? “Yes or No”…?

What they did “NOT tell YOU”… was that GUNS do NOT kill People… “People DO”…! Just this AM on the News, President Obama is calling for ACTION to limit FIREARMS..! Yet, our United Statutes Constitution… “Guarantees RIGHT to OWN & Bear FIREARMS”…!

“All that is necessary for the triumph of evil is that good people do nothing.” British Statesman, Edmund Burke.

What they did “NOT tell YOU”… is that the NEWS Media have a LIBERAL SLANT to ALL their News Reporting. Their Agenda is “Anti – CHRIST” / “Anti – GOD’S WORD: The Bible! Their AGANDA is to destroy the ‘Righteousness’ of a Nation; for those WHO: Obey GOD & His Holy Word! Their Agenda is to make ‘America’ & its ‘Freedoms’… like those of the European Socialist Debtor Nations…! Say it isn’t So…? The Welfare & Food Stamp rolls have DOUBLED… during the ‘Obama Administration!’ The Prosecution of ILLEGAL ALENES is at an ALL TIME LOW… during the ‘Obama Administration!’ GOD is punishing our Nation… using him…! He did this to Ensure His Re – Election… this year!

*** (2Chronicles 19:2) And Jehu the son of Hanani the seer went out to meet him, and said to king Jehoshaphat, Should you -> Help the ungodly, -> and love them that hate the LORD? Therefore is wrath upon you from before the LORD.