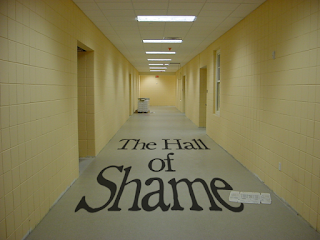 Because people do NOT want God: nor His Holy Word… “Shame is Gone!” from Most of Society, Worldwide!

*** (Psalms 53:2-to-6) God looked down from Heaven on the sons of mankind to see if any was discerning, who was seeking God.
(Psalm 53:3) Everyone has turned away; they have altogether become filthy; not one is doing good, no, not even one.
(Psalm 53:4) Have the workers of iniquity no knowledge? They eat up my people as they eat bread; they have not called on God.
(Psalm 53:5) There they dreaded with dread, where no dread was; for God has scattered the bones of him who camps against you; you have put them to shame because God rejects them.
(Psalm 53:6) Who will give from Zion the salvation of Israel? When God brings back the captivity of His people, Jacob shall rejoice, and Israel shall be glad.

*** (Romans 1:20-to-32) For since the creation of the world his invisible attributes-his eternal power and divine nature-have been understood and observed by what he made, so that people are without excuse.
(Rom 1:21) For although they knew God, they neither glorified him as God nor gave thanks to him. Instead, their thoughts turned to worthless things, and their ignorant hearts were darkened.
(Rom 1:22) Though claiming to be wise, they became fools
(Rom 1:23) and exchanged the glory of the immortal God for images that looked like mortal human beings, birds, four-footed animals, and reptiles.
(Rom 1:24) For this reason, God gave them over to impurity to follow the lusts of their hearts and to dishonor their bodies with one another.
(Rom 1:25) They exchanged God's truth for a LIE: and worshipped and served the creation rather than the Creator, who is blessed forever. Amen.
(Rom 1:26) For this reason, God gave them over to degrading passions. Even their females exchanged their natural sexual function for one that is unnatural.
(Rom 1:27) In the same way, their males also abandoned the natural sexual function of females and burned with lust for one another. Males committed indecent acts with males, and received in themselves the appropriate penalty for their perversion.
(Rom 1:28) Furthermore, because they did not think it worthwhile to retain the full knowledge of God, God gave them over to degraded minds to perform acts that should not be done.
(Rom 1:29) They have become filled with every kind of wickedness, evil, greed, and depravity. They are full of envy, murder, quarreling, deceit, and viciousness. They are gossips,
(Rom 1:30) slanderers, God-haters, haughty, arrogant, boastful, inventors of evil, disobedient to their parents,
(Rom 1:31) foolish, faithless, heartless, ruthless.
(Rom 1:32) Although they know God's just requirement-that those who practice such things deserve to die-they not only do these things but even applaud others who practice them.

*** (Isaiah 43:10-to-13) You are My witnesses, says the LORD Jehovah, and My servant whom I have chosen; that you may know and believe Me, and understand that I am He. Before Me no God was formed, nor shall there be after Me.
(Isa 43:11) I, I am the LORD Jehovah; and there is NONE to save besides Me.
(Isa 43:12) I have declared, and have saved, and I have shown, when there was no strange god among you; therefore you are My witnesses, says the LORD Jehovah, that I am God.
(Isa 43:13) Yea, before the day was, I am He; and no one delivers out of My hand; I will work, and who will reverse it?

Do You know about “Blush”…? Yes, that ladies makeup that they apply to make their face seem to ‘Blush’…? It is only a ‘False Blush’, because of the “Hardened Hearts” of ‘women & men’ “Today!” Many choose NOT remember, when people on TV actually wore ‘Pajamas!’ There were “NO Unmarried”… SHACKING Up together! There were NO, Victoria Secret MODELS showing off their ‘Svelte Bodies’, making men lust after women: other than their Wives! This “World Wide Immorality” has seemed to take over & replace: “Common Sense!”  Just what is “IT” that makes You think that America: will ever be restored to its ‘Former Greatness’…? … “NOT”…!

*** (Amos 4:10) I [God] have sent among you the pestilence after the manner of Egypt: = your young men have I slain with the sword, = and have taken away your horses; and I have made the stink of your camps to come up unto your nostrils: yet have you not returned [REPENTED] unto Me, says the LORD.

*** (Psalms 33:12) Blessed is the nation whose God is the LORD Jehovah; the people He has chosen for His inheritance.

The Hookup Waiver
Upon signature of this document both individuals involved in a hookup hereby agree to the following stipulations:
1.    Parties agree to not be bothered if the other party does not call or contact them in any way.
2.    Any contact that is made shall be conducted over text messaging or in person at the bar during last call with the sole purpose of instituting another hookup.
3.    Additional hookups shall not be expected, anticipated or looked forward to and should only happen in instances of spontaneity when neither party can find anyone better to hook up with.
4.    Both parties agree to not be bothered if either party chooses to ignore the other, spend time with other parties or hook up with other parties.
5.    Both parties agree to be discrete and act as if nothing ever happened while in the presence of other non-involved parties.
6.    Details of the hookup shall not be discussed with teammates or anyone else you may ever see near a kickball field, kickball sponsor bar or anywhere else that kickers may be found.
This waiver shall be considered legally binding and any violation of this waiver shall result in legal action in a court of law.
**This document is not legally binding in any US State, US Territory, Commonwealth Nation, Nation recognized by the UN or any other place on Earth. Use at your own risk.
*** (Ecclesiastes 8:11) Because sentence against an evil work is not executed speedily; therefore the heart of the sons of men is fully set in them to do Evil.