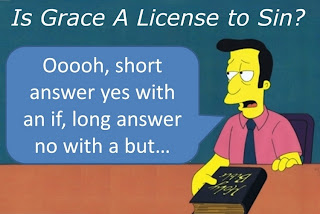 *** (Proverbs 28:13) He who covers his sins shall Not be blessed; but whoever Confesses and Leaves [Forsakes] them shall have mercy.

*** (Isaiah 5:20)  Woe to those who call evil good and good evil; who put darkness for light and light for darkness; who put bitter for sweet and sweet for bitter!

American Pseudo Christianity… is very often, “Not Biblical!” It has been “Contaminated” by our ‘Licenses’ American culture! Can that be “Proved”…? Please answer, “Yes or No”…? Simple proof is Evident in the numerous “Man Made Denominations” who all falsely ‘Claim’, “That they ‘ALL’ believe in the Bible and the God of the Bible! If that is ‘Completely True’… why then their does their Church Denominational TEACHING… “NOT All Conform”: to Scripture? Please tell me, “Why”…?

*** (Isaiah 26:10) Let favor be shown to the wicked; ‘Yet’ he will ‘NOT’ learn righteousness; in the land of uprightness he will deal ‘Unjustly’, and ‘Will Not’ behold the majesty of Jehovah the LORD.

*** (1Corinthains 5:11-12-13) But now I am writing to you to stop associating with any so-called BROTHER [Sister] IF: he [she] is sexually immoral, greedy, an idolater, a slanderer, a drunk, or a robber. With such a person you must even stop eating.
(1Cor 5:12) After all, is it my business to judge outsiders? You are to judge those who are inside, aren't you?
(1Cor 5:13) God will judge outsiders. "Put that wicked man [woman] away from you."

How a ‘Hyperbole’ [exaggeration] …? I am a Christian and work in an accounting firm. I have control of the … ‘monies & securities’… for that ‘Firm’.  I get tempted and “Steal” some ‘Barer Bonds [Ten Thousand ‘US’ Dollars– 10K].’  Because of the nature of such securities, I get away with it. I am ‘convicted’ in my heart, about the ‘Theft’ and… “Confess it to Jesus!” …I claim… “1John 1:9 – If we confess our sin, He is faithful to forgive us our sins and cleanse us from all unrighteousness.”  Am I “Then” required to… “Give back the Monies or Securities”…? Please answer this question …“Yes” = or = “No”…?

*** (Luke 3:8) Therefore bring forth fruits worthy of repentance; and do Not begin to say within yourselves; We have Abraham for our father. For I say to you that God is able to raise up children to Abraham: from these stones.

“The LORD God, the Holy Omniscient God of the Bible… has given us His Holy Word! Those that say they are His… “Must ‘Live’ by It!” Have ‘You’ read “1Corinthains & 2Corinthains” lately? ‘You’ may see those Christians there: ‘Who’ were… “NOT!” The Holy Spirit used Paul to confront them about their “SIN/SINS”…! There was infighting about whose teaching they were following. There was open “Sexual” sins; and the Church was NOT as much as being ‘Ashamed or Convicted!’ Believers were taking “Believers to Court”: before “Unbelievers!” Just like Christians IN: Divorce court today! Drunkenness at the communion table; and some were Weak; some were Sick; and the Lord actually ‘Killed’ some! In Acts 5, God cleansed the Church and the Fear of God… was once again ‘Restored’. The problem here in America: is that the Church does “NOT” Fear God… nor “His Holy Word!” America ‘Mirrors’ the Laodicean Church in… “Revelation 3:14-to-22”…!

*** (1Corinthains 5:1-2) It is actually reported that ‘sexual immorality’ exists among you, and of a kind that is ‘NOT’ found even among the gentiles. A man is actually living with his father's wife!
(1Cor 5:2) And you are being ‘arrogant’: instead of being filled with grief and seeing to it that the man who did this is ‘removed’ from among you.

*** (Malachi 2:16) The LORD Jehovah, the God of Israel, says He hates DIVORCE; and to cover with violence on his garment, says the LORD Jehovah of Hosts. Then guard your spirit, and do Not act treacherously.

*** (Luke 16:18) Any man who divorces his wife and marries another woman commits adultery, and = the man who marries = a woman = divorced from her husband = commits Adultery."

*** (1Corinthains 7:10-11) And unto the married I command, yet not I, but the LORD, Let NOT the wife depart from her husband:
(1Cor 7:11) But and if she depart; let her remain unmarried; or be reconciled to her husband: and let “NOT” the husband ‘Divorce’ his wife.