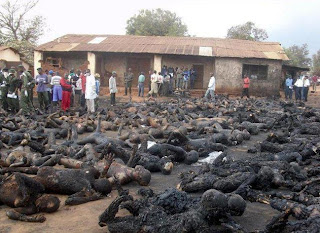 *** (Luke 16:13) NO servant can serve TWO masters. For either he will Hate the one and Love the other, OR else he will ‘Hold’ to the one and ‘Despise’ the other. You CANNOT: serve God and mammon. [Anything Else!].

God gives to a ‘Nation or Peoples’… the Leader they “DESERVE”… according to their response to “HIM” – God! (Daniel 4:17)

Are You Born Again by the Holy Spirit of GOD…? Do You call Christ Jesus your “Lord & Savior”…? I am both a “Veteran & Born Again!” Well WHY: Then do You… “Trust Politics”…? “POLITICS” is the world’s “Largest Religion!” It makes itself “god” [small g] and then will NOT submit itself to the Real GOD: and TO: “HIS Holy Word: and Its Principles!” God says, “Exodus 20:13. You shall NOT murder the Innocent!” Yet, “Politics”… has Approved & Implemented… “Abortion!” Here in America, “MANY” who call themselves Christians [?] spend MORE: ‘Money &Time & Effort’ to bring about a “Political Solution” to “PROBLEMS!” Such problems are the KIND: that “ONLY” God can Fix!  The ‘Hearts & Minds’ of mankind is “CORRPUT!” Please tell me: HOW then can Goodness & “God’s Righteousness’… be ‘Implemented by POLITIC’…? It Cannot: NOR, will it ever be…!

All Politics is… “Anti–Christ”…! Yes, even… “American Democracy!”

*** (Romans 10:3-4) For they, being ‘Ignorant’ of God's righteousness and going about to establish their own righteousness, have NOT submitted themselves to the righteousness of God.
(Rom 10:4) For Christ is the end of the law for righteousness; to everyone who [truly] believes.

“None good but ‘One’ [God] -101” …Blog.
http://truth459.blogspot.com/2012/06/none-good-but-one-god-101-blog.html
…
“Democracy” is simply an experiment in ‘Human Government!’ Christians tell ME: they are involved in Politics: serving GOD! Are they “Deceived”…? Does Politics ‘Approve’ the Bible or simply “Tolerate IT?” Many of the Politicians use the ‘religious’ spin, to get their votes & approval. Yet, which of the ‘Senators or Representatives’… has a Born Again testimony about Christ Jesus, THE: Lord of Lords, Kings of Kings…? Please tell me…? Oh yes, did Christ Jesus give us a… “Political Mandate” OR a “Spiritual Mandate”…? Why did “Democracy” -> “NOT WORK”… in the Philippines or Iran…? Surely You have been “Blinded by Americanism!” One more Time…

God gives to a ‘Nation or Peoples’… the Leader they “DESERVE”… according to their response to “HIM” – God! (Daniel 4:17)

I do NOT support most of the “WARS”, American Soldiers have been sent TO…!  Perhaps You approve of the “USELESS Wars” of… “Korea, Viet Nam, OR even the Gulf Wars?” What about the many Americans killed in Foreign Conflicts, such as ‘Yugoslav or Mogadishu?’ And to what END: were was America under any danger? “POLICICS” plays a key role in the “DECEPTION” of the American public! Did You watch TV during the Gulf Wars? One the nurses aid who Testified before Congress… as to the Iraqi soldiers that came into the hospital in Kuwait and took children out of there? Such “Emotion” was used to “Evade the Truth!” Investigation late showed that she was the daughter of an ambassador and had NEVER worked as a nurse aid, NOR had she ever been in Kuwait! Last night on a news program the guest said, “I draw the line, when nerve gas is used on Children!” The commentator said, “How then is that Any Different; then the children killed by Bombs & Bullets”…? There is “NO Difference”…! I could go on for “HOURS” with such facts about Wars!

But the Bottom LINE IS: “American Soldiers, should “NOT” be under the control of the United Nations! NOR should they be USED: to dispel the internal conflicts of foreign nations! There have been WARS, for Thousands of Years…! It is NOT going to Change! And… “America” does… “NOT need to be, Involved!”

Why do NT Christians… & Others… Always Quote: the Word Promises about OT ISRAEL… and NEVER -> speak about the “Cursing’s” -> for NOT Obeying the LAW…?

*** (Matthew 13:19) When anyone hears the Word of the [God’s] kingdom; and does ‘Not’ understand it; then the wicked one [Satan] comes; and catches away that which was sown in his [her] heart. This is the seed sown by the wayside.

*** (Amos 4:10) I [God] have sent among you the pestilence after the manner of Egypt: = your young men have I slain with the sword, = and have taken away your horses; and I have made the stink of your camps to come up unto your nostrils: yet have you NOT returned [REPENTED] unto Me, says the LORD.
…
*** (Luke 3:8) Therefore bring forth fruits worthy of repentance; and do not begin to say within yourselves; We have Abraham for our father. For I say to you that God is able to raise up children to Abraham: from these stones.

*** (James 4:4-to-10) You Adulterers and Adulteresses! Don't you know that friendship with the world means hostility [War] with God? So whoever wants to be a friend of this world is an “Enemy of God”. [Matthew 6:24 & Luke 16:13]
(Jas 4:5) Or do you think the Scripture means nothing: when it says that the Spirit that God caused to live in us jealously yearns for us? [Joshua 24:19]
(Jas 4:6) But He gives all the more grace. And so He says, "God opposes the arrogant: but gives grace to the humble." [2Corinthains 12:6-to-10 & Hebrews 4:16]
(Jas 4:7) Therefore, Submit yourselves to God. Resist the devil, and he will run away from you.
(Jas 4:8) Come close to God, and He will come close to you. Cleanse your hands, you sinners, and Purify your hearts, you double-minded.
(Jas 4:9) Be Miserable, Mourn, and Cry. [Repent] Let your laughter be turned into mourning, and your joy into gloom.
(Jas 4:10) Humble yourselves before the Lord, and He will exalt you.

*** (Romans 8:15-16-17) For you have Not received the spirit of bondage again to fear, but you have received the Spirit of adoption by which we cry, Abba, Father!
(Rom 8:16) The Spirit Himself bears witness with our spirit that we are the children of God.
(Rom 8:17) And if we are children, then we are heirs; heirs of God and joint-heirs with Christ; so that if we suffer with Him, we may also be glorified together.