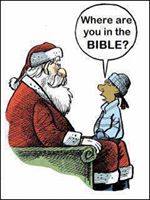 Every SONG is a “Sermon”..! It becomes a part of your Psyche, by “Repeated Use and Acceptance!” You will even LIE to your Children, to make them Comply with your wishes! Children FEAR not being ‘Visited by Santa’, Yet like their Parents…. “Do NOT Fear God”…! Our Society has been so Brainwashed, that reasoning like this blog: is called into question without examining the Facts…! “True or False”…? Does Santa KNOW, when You have been “Good or Bad”…? Weather your have been…. ‘Crying or Pouting’…? [Whining or Complaining]

Have You studied World History…? What about American History…? Any ‘Society or Culture’ is ‘directly Influenced’ by their… “Belief Structure!” Remember prior to 1973 and the “Roe-V-Wade” Supreme Court Decision about Abortion…? Unborn Babies were considered “Persons and Humans!” Since then, Over 58,000,000 Million UNBORN BABIES…. Have been Murdered by their American Mothers by Abortion! Birth control has been available for those Humans who do Not want Babies now! Yet, somehow their MORALS have been CORRPUTED…. To place their… “UNMARRIED: Sexual Drives & Desires”… before that of their “Progeny!” Death to Anyone [Baby] that comes into their Lives! Adolph Hitler and his Eugenics Program…. Sought to Destroy ANY ‘So Called’…. “Undesirables”…!  Margaret Sanger, the founder of the USA Planned Parenthood, went to “Nazi Germany”…. and studied their… “Agenda of Death!”… for Any Undesirables. Just like the Silence about… “Satan Clause”…. Americans have SILENTLY APPROVED… such an “Identical Agenda!”

One College Professor stated that ONLY… about “5%”…. Of our ‘American Population’…  “Actually Thinks!” He also stated about: “10%: Think they Think”…. And about “85%: are Not interested in Thinking!” They are like ‘Dumb Cattle’… on the way to the Slaughter House! Their Religion is one of Politics and WITHOUT of Any Real True Moral Base! They Falsely Claim…. “Conservatism”… and yet “Act Liberal!” They will Readily Accept CHANGE… without KNOWING… “Change to What”…? Simply look at our ‘Presidential Elections…?

… *** (1Peter 3:15) but sanctify the Lord God in your hearts, and be ready Always to give an answer to everyone who asks you a reason of the hope in you, with meekness and fear;

America is “NOT” a Christian Nation….! Nations cannot be Born Again, only People Can! Christmas is the second largest Holiday in China! They have Adopted the American Lust Agenda of Christmas… without Christ Jesus! Truthfully, Parents LIE to their Young Children about Santa Clause, the Easter Bunny and the Tooth Fairy! Then they tell them about GOD…? They grow UP: only to find OUT that Santa, the Easter Bunny & the Tooth Fairy… were “All Lies!” And within their Minds…. God is placed in the… “Same Status: Fiction!”

Question: Does Santa LOVE Children of ‘Rich Parents’…. MORE… than the Ones of ‘Poor Parents’…? Why then does “SANTA”…. Give the Rich Ones… "BETTER CHRISTMAS PRESENTS”…? Please tell me Why…? Do You as an Adult… LIKE: being LIED TO…?

*** (Proverbs 12:22) Lying lips are Abomination to the LORD: but they that deal truly are his delight.

*** (John 8:44) You belong to your father the devil; and ‘You’ want to carry out the desires of your father. He was a murderer from the beginning; and has never stood by the Truth; since there is “No Truth” in him. Whenever he tells a Lie, he speaks in character; for he is a Liar and the “Father of LIES!”

*** (Ecclesiastes 12:13-14) Let us hear the conclusion of the whole matter. Fear God; and keep His commandments. For this is the whole duty of man.
(Eccl 12:14) For God shall bring every work into judgment; with ‘every’ secret thing; ‘whether’ it is Good; or ‘whether “Evil”.

*** (1Corinthains 11:30) That's why so Many of you [Christians] are WEAK; and SICK; and a Considerable number are DYING.

Do You call the Blessed Name of Christ Jesus…? Do You tell OTHERS… about your Faith in the Finished Work of Redemption by Christ Jesus, the Messiah of Israel…? Or do You with our Christmas Celebrations… “Shame the TRUTH”… about the Christ Jesus of Christmas: The Passover Lamb of God [1Cor 5:7]…? Instead of calling Santa what He really IS… do You Perpetuate: THE LIES OF SATAN CLAUSE”…? Simply Remember if it is NOT the “Whole Truth”… then it is a… “LIE”…!

“Christmas Celebrations & the ‘Salvation Message’ – 101” …Blog.
http://truth459.blogspot.com/2014/12/christmas-celebrations-salvation.html
…
*** (1Corinthians 5:4-5-6) in the name of our Lord Jesus Christ, when you are gathered together, with my spirit; also, with the power of our Lord Jesus Christ;
(1Cor 5:5) to deliver such a one to Satan for the destruction of the flesh; so that the spirit may be saved in the day of the Lord Jesus.
(1Cor 5:6) Your boasting is not good. Do you not know that a little leaven [SIN] –> leavens [Contaminates] the whole lump [Church]?

*** (2Corinthians 7:10) For having sorrow in a godly way results in REPENTACE that leads to Salvation and leaves no regrets. But the sorrow of the World produces Death.