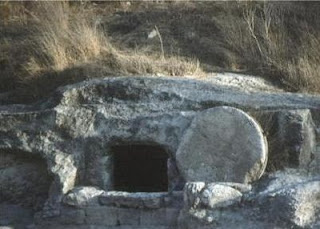 This is the fifth… in this series of a discussion about what the ‘Catholic Church’ teaches and what ‘The Bible’ says. Many in the Catholic have been taught that Good Friday is when Christ died after His crucifixion. If you will simply read in Genesis, The Word says… and the Evening and the Morning, were the First, Second and so on. The Jewish day begins at 6 PM in the evening till… the next evening, that is “One Day!” One day + one night = one day!

Recently someone asked… about the “Resurrection of Christ Jesus”. There are several facts to be considered. Easter is celebrated by most Churches, but the nomenclature is ‘incorrect.’ Easter is in fact, a pagan holiday, with all its trappings of Easter bunnies and colored eggs and candy. Correctly, it should be called “Resurrection Sunday”. Most know that Christ Jesus was crucified by the Roman soldiers with the full approval of the Jewish religious leaders, repeatedly shouting …“Crucify Him!”

“Resurrection Sunday”… often called Easter, is also celebrated with a wrongly with a day called, ‘Good Friday.’ But herein is the problem with that… “How could Christ be in the grave… ‘Three days and three nights’… “IF”… He was crucified on Friday?” Sorry, He, Christ Jesus was ‘Not’ crucified on Friday. Again, the celebration of ‘Good Friday’ is a complete mistake. Many make an accounting error and many make excuses for time accounting counting sundown as a day, when it starts the evening.

Most Religions do not use… the ‘Bible Truth’ for their point of reference. Instead they substitute their Church teaching for Truth. Perhaps the first thing in this discussion is to see… “Who Raised the Body of Jesus?” Ask most people and they will tell you that God, the God of the Bible, raised Jesus. Most do not know that Christ Jesus said… “The He raised His own body!” Did you know that…?

Many do ‘not’ know this…! Often time I share this with that religion called, ‘Jehovah Witnesses.’ You see they “Deny”, that Christ Jesus is God. There are other Pseudo Christian religions that also deny these Bible Facts. His disciples understood these facts, John 2:22 and remembered His word and believed Him. But are there more verses that validate that Truth…?

Since the Scriptures have established… that Christ Jesus laid down His life and He Himself… took it up again. Ok but what about the difference in the… “Three days and the Three nights”… in the grave? IF He was crucified on Friday [night – one]… Saturday [night – two]… Sunday [night – 3]…? Oops…? Wasn’t He raised on Sunday Morning…? Yes He was… so He could “NOT” possibly have been… ‘Crucified on Friday.’ Ok, so what is the solution? The answer is in the Bible and… “Not in Church teaching and Tradition!” The key, is the word… ‘Preparation’.

The First Day of the Week… “Sunday!” The Jews ended their week on the Sabbath, the day of rest, as commanded by the Law of God. Sunday became the first day of the week, as the NT Church took it as the day of worship. Traditional Good Friday was the convenient day to start the Resurrection Sunday celebration. The Communion service is part and parcel of this resurrection celebration. As it celebrates the death, burial and resurrection of Christ Jesus.

Perhaps now is the time… to ask you to examine what you believe about God and your Traditional Practice of your “Faith in God”. Many times, there are ‘other religious’ trappings and practices that have “Nothing” to do with God or His Word… The Bible! Do you believe the Scriptures... or what the Catholic Church teaches, they are NOT the Same!