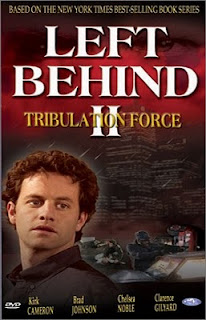 (1Thessalonians 5:21) Prove all things; = hold fast that which is good.


Have you read… the book or seen the video, “Left Behind? This is another duplication of the “Thief in the Night” philosophy of some years ago. It implies, that the… ‘Intended’… was somehow left behind, when they should have been taken along. Did you ever ‘leave’ behind somewhere a pair of sunglasses or something of value? Of course we all have. But this “False Theory”… shared with Believers… is perpetrated by those, who… “Do Not”… know the Scriptures nor what evangelism really means.

*** (John 10:16) And I [Jesus] have other sheep who are not of this fold. I must also lead those, and they shall hear My voice, and there shall be one flock, one Shepherd.

*** (John 17:24-25-26) Father, I desire that those whom You have given Me, that they may be with Me where I am, that they may behold My glory which You have given Me, for You have loved Me before the foundation of the world.
(John 17:25) O righteous Father, indeed the world has not known You; but I have known You, and these have known that You have sent me.
(John 17:26) And I made known to them Your name, and will make it known, so that the love with which You have loved Me may be in them, and I in them.

There are many… such verses in the “OT & NT” about those that are His. Surely after reading these verses, one cannot ‘seriously’ believe that… anyone that is His, will be… ‘Left Behind’…? This is one of the problems, that through Church history, many have been in error. All denominations are manmade and there is ‘not one’ denomination that is God made. Consequently ‘many’, simply listen to the preacher, without validating what was said… by the Holy Scriptures, the Bible!

*** (Matthew 22:29) Jesus answered and said to them, You err, not knowing the Scriptures nor the power of God.

*** (Acts 17:11) And these were more noble than those of Thessalonica, in that they received the Word with all readiness of mind and searched the Scriptures daily to see if those things were so.

*** (Ephesians 5:9-10) for the fruit of the Spirit is in all goodness and righteousness and Truth,
(Eph 5:10) proving what is acceptable to the Lord.

About now… one can see that “Only The Scriptures” can be used to ‘Validate’… “God’s Truth!” May I ask you a simple question? Where is Satan’s camp, and where is his greatest work? May I suggest… that it is “NOT”, in the ‘World’, because the Scriptures say that he has ‘blinded’ those that do not believe…“2Continthians 4:3-4”…? His greatest work is in the ‘Organized Church’, in the denominations that tote their party line! Say it isn’t so…? Perhaps this will help you understand this Truth?

*** (2Corinthians 11:13-14-15) For such ones are false apostles, deceitful workers, transforming themselves into the apostles of Christ.
(2Cor 11:14) Did not even Satan marvelously transform himself into an angel of light?
(2Cor 11:15) Therefore it is no great thing if his ministers also transform themselves as ministers of righteousness, whose end shall be according to their works.

*** (2Peter 2:1-2) But there were also false prophets among the people, even as there will be false teachers = AMONG = you, who secretly will bring in destructive heresies, even denying the Master who bought them, bringing on themselves swift destruction.
(2Pet 2:2) And = MANY =will follow their pernicious ways, and because of them the way of truth will be evil spoken of.

*** (Mark 8:33) But when He [Jesus] had turned around and looked on His disciples, He rebuked Peter, saying, Go behind Me, Satan! For you do not mind the things of God, but of the things of men.

*** (Galatians 2:11-to-16) But when Peter came to Antioch, I [Paul] opposed him to his face, because he was to be blamed.
(Gal 2:12) For before some came from James, he ate with the gentiles. But when they came, he withdrew and separated himself, fearing those of the circumcision.
(Gal 2:13) And the rest of the Jews also dissembled with him, so as even Barnabas was led away with their dissembling.
(Gal 2:14) But when I saw that they did not walk uprightly with the truth of the gospel, I said to Peter before all, If you, being a Jew, live as a Gentile, and not as the Jews, why do you compel the gentiles to act like Jews?
(Gal 2:15) We Jews by nature, and not sinners of the gentiles,
(Gal 2:16) knowing that a man is = NOT = justified by works of the Law, but through faith in Jesus Christ; even we believed in Jesus Christ, that we might be justified by the faith in Christ, and not by works of the Law. For all flesh will not be justified by works of law.

Here are ‘Two’… different examples. The first are “False Christians”… who purposely are in the Churches to ruin the validity of the Scriptures. Yes, if Satan could come as an angel of light, his false ministers and workers… so too ‘only’ appear to be righteous. There is an easy way… ‘to test them’… by simply applying the “Holy Word of God”, and checking their reactions. Those whether in the pulpit or in the congregation that ‘do not’ hold to… “The Complete and Only Authority of the Scriptures”… surely are ‘not’ of God, the God of the Bible.


The ‘other’ group… are the redeemed; who out of sheer ignorance and immaturity; speak out of the flesh… instead of speaking, validated by the “Holy Word of God!” Peter had… ‘the foot in mouth’… disease. Often times he spoke out of his flesh… rather than by, ‘It is written!’ His growing in grace and in the knowledge and admonition of the Lord, which can be seen in his later epistles of… “1 & 2Peter”. By then, though experience and his yielding to “The Word”… Peter went on to ‘Spiritual Maturity.’ So is it with all that are ‘Truly Born Again’… by the Holy Spirit of God! Remember this simple verse… “(John 3:30) He must increase, but I must decrease.”

*** (2Timothy 2:15-16) Study earnestly to present yourself approved to God, a workman that does not need to be ashamed, rightly dividing the Word of Truth.
(2Tim 2:16) But shun profane, vain babblings, for they will increase to more ungodliness.

*** (2Timothy 3:13-to-17) But evil men and seducers will go forward to worse, deceiving and being deceived.
(2Tim 3:14) But continue in the things that you have learned and have been assured of, knowing from whom you have learned them,
(2Tim 3:15) and that from a babe you have known the Holy Scriptures, which are able to make you wise to salvation through faith in Christ Jesus.
(2Tim 3:16) All Scripture is God-breathed, and is profitable for doctrine, for reproof, for correction, for instruction in righteousness,
(2Tim 3:17) that the man of God may be perfected, thoroughly furnished to every good work.


*** (2Peter 3:18) But grow in grace and in knowledge of our Lord and Savior Jesus Christ. To Him, be the glory, both now and to the day of eternity. Amen.

*** (2Peter 3:15-16) And think of the long-suffering of our Lord as salvation as our beloved brother Paul also has written to you according to the wisdom given to him
(2Pet 3:16) as also in all his letters, = speaking in them of these things; = in which are some things hard to be understood, = which the unlearned and unstable pervert, = as also they do the rest of the Scriptures, = to their own destruction.

One last thing… you have been ‘Born Again’… for how long…? Christ has called His ones to be His ‘Soldiers’… “2Timothy 2:3-4-5”… to uphold the Truth of His Holy Word! If you say you Love Jesus… then you will also… Love His Word & Know His Word!


*** (James 1:22) Keep on being doers of the word, and not merely hearers who deceive themselves.


*** (Amos 8:11) Behold, the days come, says the Lord Jehovah, that I will send a famine in the land; not a famine of bread nor a thirst for water, but of hearing the Words of Jehovah.