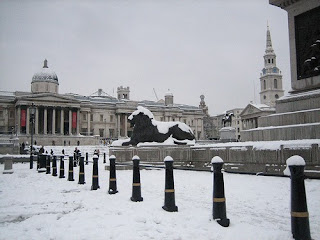 This past week… I went again to London UK, as has been my practice the past few years for a holiday. I left the day after Thanksgiving and was stuck there… Two Extra Days… because of the Snow and freezing Weather! A massive cold front; blanked much of Europe and there in the UK record cold readings were recorded. Matter of fact… it was the coldest winter in 25-years on record. Early this AM… a limited number of Trains were running and I was able to get to the Gatwick airport; which only opened after two days. I am now home at 8:30 PM [2030] writing this.

This week I spent some time… in the British Museum, viewing the Rosetta Stone and other ancient artifacts, plundered from throughout the world. But in all that art work and ancient carvings; some from 2,000 BC… I saw absolutely noting giving any glory to “The Father, Creator God, of the Bible! There were many works displayed, prompting the ‘Glory of Mankind’… and all their ‘pomp and circumstance’. As I was exiting that museum… these words of Scripture cam to my mind…!

*** (Revelation 20:10-15) And the Devil who deceived them was cast into the Lake of Fire and Brimstone, where the beast and the false prophet were . And he will be tormented day and night forever and ever.
(Rev 20:11) And I saw a great white throne, and Him sitting on it, from whose face the earth and the heaven fled away. And a place was not found for them.
(Rev 20:12) And I saw the dead, the small and the great, stand before God. And books were opened, and another book was opened, which is the Book of Life. And the dead were judged out of those things which were written in the books, according to their works.
(Rev 20:13) And the sea gave up the dead in it. And death and hell delivered up the dead in them. And each one of them was judged according to their works.
(Rev 20:14) And death and hell were cast into the Lake of Fire. This is the second death.
(Rev 20:15) And if anyone was not found having been written in the Book of Life, he was cast into the Lake of Fire.

Oh yes… I did have an opportunity to share the Gospel at Hyde Park, Speakers Corner that Sunday! During my previous visits I shared a platform with another Christian brother that speaks there each Sunday. But, but Lord answered my prayers not in the way I expected. Instead of preaching to a crowd, I had an opportunity of… a one on one… ‘Question & Answer’ opportunity with one seeking our Lord Jesus. Sever other people stopped by and listened, but more important than numbers… is the quality… of our Message about Christ Jesus!


Please remember ‘one’ thing…! If Jesus brings someone to you; ‘you’ do not need to have all the answers for that person. Often times, if I do not know, I will simply say, “Please allow me to research the Scriptures for an answer for you!” Remember the Bible is not a book of the… “Answers of & for Life”… but God’s Spiritual Guidelines that will give anyone the correct Spiritual Principle to apply to life situations.

*** (James 1:5-6-7) Now if any of you lacks wisdom, he should ask God, who gives to everyone generously without a rebuke, and it will be given to him.
(Jas 1:6) But he must ask in faith, without any doubts, for the one who has doubts is like a wave of the sea that is driven and tossed by the wind.
(Jas 1:7) Such a person should not expect to receive anything from the Lord.

*** (Luke 4:4-8) Jesus answered him, "It is written, 'One must not live on bread alone, but on every word of God.'"
(Luke 4:5) The devil also took him to a high place and showed him all the kingdoms of the world in an instant.
(Luke 4:6) He [Satan] said to Jesus, = "I will give you all this authority and the glory of these kingdoms. For it has been given to me, and I give it to anyone I please.
(Luke 4:7) So if you will worship me, all this will be yours."
(Luke 4:8) But Jesus answered him, "It is written, 'You must worship the Lord your God and serve only him.'"

*** (1Peter 3:15) but sanctify the Lord God in your hearts, and be ready always to give an answer to everyone who asks you a reason of the hope in you, with meekness and fear;

*** (2Timothy 2:3-4-5) Join me in suffering like a good soldier of Christ Jesus.
(2Tim 2:4) No one serving in the military gets mixed up in civilian matters, for his aim is to please his commanding officer.
(2Tim 2:5) Moreover, no one who is an athlete wins a prize unless he competes according to the rules.

“Ok”… are you ready… to give an answer to anyone, who asks you about Jesus, the Christ Jesus of the Bible…? Do you ‘read & study’… “His Holy Word”… ‘Daily’… so that you will be prepared to give that answer…? Remember you answer must be based on Scriptures… for that is the “Only Basis for TRUTH”… God’s Truth! Are you… His Witness of His Truth…?

*** (Acts 17:11) And these were more noble than those of Thessalonica, in that they received the Word with all readiness of mind and searched the Scriptures daily to see if those things were so.

*** (John 7:38-39) He who believes on Me, as the Scripture has said, "Out of his belly shall flow rivers of living water."
(John 7:39) But He spoke this about the Spirit, which they who believed on Him should receive; for the Holy Spirit was not yet given, because Jesus was not yet glorified.