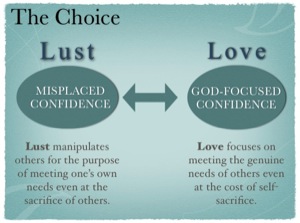 Recently a good friend… asked me some questions about; what the Bible says; about this topic. I simply provided what God has revealed in His Holy Word and then what “Is” the… “Responsibility of Obedience [James 1:22 & Luke 3:46]”… for those that ‘say’… they are His! Often times ‘Many’ are so involved with the worldly mindset; that they forget… to “Whom”, they are bough for and to “Whom”… they are to… “Serve with Love!” Many ‘only’ say they… Love Jesus… but seldom Obey His Holy Word!

Today in America… and in other nations, throughout the Word; there are those that ‘Claim’… that they belong to Christ Jesus. “Most” of these are ‘only’ religious and… “Never–Read & Study & Obey”… His Holy Word, the Bible! They ‘only’ have their religion and hardly ever, if at all… Obey what God; the God of the Bible; says in His Holy Word! They are so ‘contaminated’… in and by this worldly system, that they cannot even, ‘blush!’ God, ‘never’ intended for His creation to know… both “Good & Evil!” Simply read… “Genesis 2:16-17.”

Human Sexuality is ‘Perverted’… and thus outside of its Biblical Use… is at war with God! Say it isn’t ‘So’…? Surely anyone can see ‘how’ it is; so ‘rampant’ in Advertizing…? What does a half naked man or woman… have to do with selling ‘Anything?’ The following of the Hollywood Icons, both men & women… is part & parcel… of this Marketing of Human Sexuality. In a short ‘40’ years of Television and Movies… we have seen a ‘derogation’ of God’s Biblical Standard; for Human Sexuality! Cougars’… a TV program about older women, having Unmarried Sex, with younger men! And ‘all’ those other Programs, ‘promoting’… their “Homosexual [Perverted] Agenda!” Need I say anything about those ‘Victoria Secret’ commercials…?

*** (Romans 1:25-28) They exchanged = “God's Truth” = for a ‘Lie’ = and = worshipped and served = the creation [mankind] = rather than the Creator [God], = Who is blessed forever. Amen.
(Rom 1:26) For this reason, = God = gave them over = to degrading passions. = Even their ‘females’ = exchanged their natural sexual function = for one = that is ‘unnatural’.
(Rom 1:27) In the same way, = their males also = ‘abandoned’ = the natural sexual function of females = and = burned with lust for one another. = Males committed = indecent acts with males, = and received in themselves = the appropriate penalty = for their ‘perversion’.
(Rom 1:28) Furthermore, = because = they did not think it worthwhile = to retain the full knowledge of God, = God gave them over = to degraded minds = to perform acts = that should not be done.

Now ‘Please Don't’ tell me… that “Most”… of what you see on the TV and Videos; “IS NOT”… ‘Truly’ in… the “Direct, ‘Rebellion’ and ‘Disobedience’ ”… to the Holy Word of God! Of course it is… everyone knows… “Sex Sells!” That is the world’s system; to glorify ‘Mankind’ and their ‘Human Sexuality!’ Most are so deadened to any type of Morality… that they see “Nothing Wrong”… with “Casual Sexuality!” The World… will ‘always’ refute… God’s Word and God’s Standard of Holiness… and Marriage Human Sexuality…! Yes Sex is for Marriage… “Only!”

“Most” do not know this… that the ‘control’ of this world’s systems… is ‘driven’ by Satan and to those, to whom… he gives it! Why does one see so ‘very many’ wrongs… that ‘never’ appear to be righted…? Here in America, there is an over… “Four Trillion Dollar”–“Illegal Drug Trade!”… ‘each’ year and it is ‘growing!’ Are moral or immoral… people purchasing those “Illegal Drugs?” Remember about the Baseball scandals and those Champion players using Illegal Drugs…?

“Perverted Human Sexuality”… here in America; has caused the Murder of… “Innocent Babies”… in the Mother’s Wombs! Children, conceived out of Correct Human Sexuality… are born and raised into adults… to be made functioning members of a society and nation. But instead… American “Human Sexuality”… has been turned into… The Murder of Over “55,000,000–Million”… Innocent Babies! And hardly anyone… speaks out against it…! “IF” you do… then you are classified… “A Religious Zealot!” What is wrong with that picture…?


“Today’s Human Sexuality”… has simply ignored those birth control measures and ‘opted out’ of–using them. Human Sexuality has degraded from… “Marriage”… to ‘Friends with Benefits!’ That ‘sexuality’ mindset that allows… ‘sex with no attachments’… as casual as sharing cold germs! Did you ever wonder why… there are so ‘very many’… ‘Prescription’ and ‘over the counter’ products… for those “Sexually Transmitted Diseases” [STD’s] …? Chlamydia, Herpes and other ‘Viral’ infections are for… “Life/with no Cures! The Aids Virus… is a death sentence; and yet, the Human Sexuality… has not even slowed down!