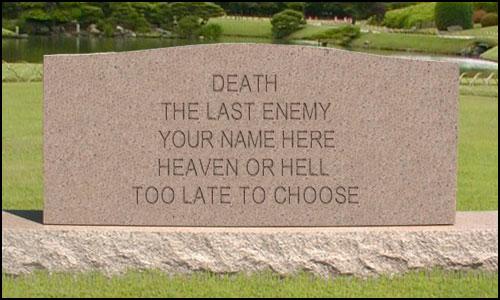 *** (Hebrews 2:14-15) Since then the children have partaken of flesh and blood, He [Jesus] also Himself likewise partook of the same; that through death He might destroy him who had the power of Death (that is, the Devil),
(Heb 2:15) and deliver those who through fear of Death were all their lifetime subject to bondage.

Have any of your “Parents or Siblings”… passed into Eternity…? I was raised in an Agnostic Catholic home and attended Catholic School. After high school, I went immediately into the USAF, during the Viet Nam Conflict. Some of those I went to high school with: did Not return. At that time, I had left my “False Catholic Faith”. Early in my 30’s: I was drawn to Christ Jesus… “John 6:44”… and was Truly Born Again… “John 7:38-39 & Acts 15:8-9!” Later on in life, my Father died and some 8 years later, so did my Mother. My Father refused to allow me to share my faith with him and passed into eternity without Salvation in Christ. By the Grace of God: I was allowed to lead my mother to Christ: only weeks before her passage into eternity. Strange as it seems, “MOST” people are NOT willing to… “Openly Discuss ETERNITY”… with their ‘Living Family Members’. Perhaps that is WHY: many have mixed feelings during the Holidays and Birthday Remembrances of their Parents. Often times, I see on Face Book… “Adult Children”… who have elderly parent who go into the Hospital for some medical reason. They are then… Begging for your Prayers for them… instead of allowing God’s Principles of Life & Death take their Natural courses. So Too… MANY Christians [?] wrongly think they will escape their… ‘Own Death’, by the Rapture… [Matthew 27:52-53] Remember Death is NOT our Friend: but our “Enemy”, part of the Curse on the Human Race, by the disobedience of… “Adam & Eve!”

*** (1Timothy 2:13-14-15) For Adam was first formed, then Eve.
(1Ti 2:14) And Adam was not deceived, but the woman being deceived was in the transgression.
(1Ti 2:15) But she will be kept safe through childbearing, if they continue in faith and love and holiness with sensibleness.

*** (Romans 5:10-11-12) For if when we were enemies, we were reconciled to God through the death of His Son [Christ Jesus], much more, being reconciled, we shall be saved by His life.
(Rom 5:11) And not only so, but we also rejoice in God through our Lord Jesus Christ, by whom we have now received the reconciliation. [2Corinthians 5:18-to-21]
(Rom 5:12) Therefore, even as through one man sin entered into the world, and death by sin, and so death passed on all men inasmuch as all sinned:

Simple QUESTION: Is God Your Father, Christ Jesus your Savior and are You… “His Real Child”…? Does the Holy Spirit of God… INDWELL: your “Mortal Terminal Body”…? He is the ONLY one that can bring You: the Complete Assurance: of Eternal Life & Salvation! There are MANY here in America and worldwide: who claim they are Christians [?].

*** (Romans 8:15-16-17) For you have Not received the spirit of bondage again to fear, but you have received the Spirit of adoption by which we cry, Abba, Father! [Daddy!]
(Rom 8:16) The [Holy] Spirit Himself bears witness with our spirit that we are the children of God.
(Rom 8:17) And if we are children, then we are heirs; heirs of God and joint-heirs with Christ; so that if we suffer with Him, we may also be glorified together.

Simply think about “ALL” the… “Catholics, Mormons, Jehovah Witnesses & Others”… WHO: Falsely Claim Salvation… Clinging to their False Denominations…? Did You know Christ Jesus spoke about them… “Matthew 7:21-22-23”…? He call them the… “MANY”…!  And those Jews who have Rejected Christ Jesus as their Messiah…? And the Muslims who have… “Another Jesus”… [2Corinthains 11:4]… and are Damned to the “Eternal Lake of Fire for Eternity”…? Most who Claim they are Christians [?] do NOT know, nor want to Know: their Bibles…! They speak about God and yet Reject Christ Jesus as God… [Hebrews 1:5-to-8 & Colossians 1:9-to-20]! Those “MANY” also Refuse the… “Complete Authority” [John 12:48]… of the Holy Word of God…! Remember when we ALL: stand before the Judgment Seat of Christ Jesus …[1Corinthains 3:13-14-15]… Your pastor or Church Denomination CANNOT: stand before His Holy Word…!

*** (Revelation 20:15) And if anyone was NOT found having been written in the Book of Life, he was cast into the Lake of Fire.

Wow… Did you ever see those Verses Before! The First and the Last was… Dead… and NOW is Alive… Forever and Ever! Amen! Surely if this is True… then there must be an OT Scripture where someone saw GOD? Of course we all know about Moses seeing God as He passed by and Moses hid in the cleft of the Rock. Exodus 33:17-to-23! But that was Moses alone? How about 'Other Witnesses'?

*** (Exodus 24:9-to-13) And Moses went up, and Aaron, Nadab, and Abihu, and seventy of the elders of Israel.
(Exo 24:10) And they saw the God of Israel. And there was under His feet as it were a paved work of a sapphire stone, and as the essence of the heavens for clearness.
(Exo 24:11) And upon the nobles of the sons of Israel He did not lay his hands. Also they saw God, and ate and drank.
(Exo 24:12) And Jehovah said to Moses, Come up to Me in the mountain, and be there. And I will give you tablets of stone, and the Law, and commandments which I have written, so that you may teach them.
(Exo 24:13) And Moses rose up, and his attendant Joshua. And Moses went up into the mountain of God.

HOW did they SEE the “God of Israel”… when the Scripture Says… *** (John 4:24) God is a Spirit, and they who worship Him must worship in Spirit and in Truth. Simple Answer, they saw… “Christ Jesus”…!

*** (Colossians 1:15) Who is the image of the invisible God, the First-born of all creation.

What about YOU…? If you are Truly Born Again, the Holy Spirit of God… will reveal these Truths to You… through His Holy Word! This is the DIFFERENCE between those why Claim to be Christians… and those Who are TRULY Born Again by His Holy Spirit…!

*** (2Corinthains 5:19-20-21) For in Christ God; was reconciling the world [any that would come] to Himself; by Not counting their sins against them through His forgiveness]; and He has committed to us; the message of reconciliation. [John 3:3]
(2Co 5:20) Therefore, we are Christ's representatives; as though God were pleading through us [to You!]. We plead on Christ's behalf: “[You] Be reconciled to God!”
(2Co 5:21) God made the One [Jesus]; Who did not know sin; to be sin for us [Christ our Passover 1Cor 5:7]; so that we might become God's righteousness in Him [Jesus].