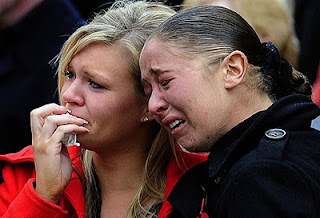 Perhaps you did ‘NOT’… get all the way through yesterdays blog? Was it too painful for you to think about, your own death, or the death of someone who has passed into… ‘Eternity?’ No one escapes death although many have tried. Of course you have heard the saying, “You cannot take it with You!” Never will you see a Hearse… pulling a trailer to the cemetery. Although I did hear of one man, who had his ‘dead body’ placed in his Cadillac, and both into a cemetery plot and then the hole; filled with “Cement!” I guess he did… take it with him! …LOL! At least, no one else got it.

As we discuss the “Funeral”… you must have made some plans for the hereafter…? You planned for retirement, so that you would have funds to do what you wanted. You planed your vacation trips and you even planned what, you will watch on ‘TV or Video’ this week. But what about Eternity and its… “Finality?” There are “NO”… “Second Chances” nor any, “Do Over’s!” Reincarnation is not a reality; neither is being frozen in “Cryo-Suspension” and revived later, as an option. Death is the final human act you will perform… till the “Judgment by Christ!”

These earthly bodies… in which the ‘real you’, resides will be resurrected, with the ‘real you’. Some, will have new bodies and some will have their old bodies; for Eternity. Waiting till just before death, is not the right time. If this is painful for you to think about; better “Now”… than when it is… “Too Late!” Once you die, there are “No Second Chances”… for you or for anyone! So just “Who”… did you… “Fail to make this, ‘known’… TO?” Was it your friend or relative; who just recently passed from… “Life to Death”…?

About now… you can readily see that there are… “Two Groups”… at the resurrection! Some to Life… and some to ‘Damnation’. Perhaps you know someone who was ‘religious’ but… “Never Loved Jesus and His Word, the Bible?” Where do you think ‘they’ will be; during the last resurrection? There are ‘only’ two places one goes; when they die. Sorry, there is no ‘Purgatory’, that the CC teaches. Surely IF… true faith in God was ‘not’ enough during life, the prayers of sinners cannot free one from Hell. This true Bible story, often called a parable, is a ‘real’ picture of what happens after death. Oh yes, Bible parables ‘do not’ have proper names; i.e. Abraham and Moses! This is a true story!

In the OT Economy… there were ‘two’ places for the dead to go. One with Abraham, the father of Faith. The other place; ‘Hell, the place of torment; for the unjust dead. About now, someone is saying, that is still a Bible parable and ‘not’ really a true story. Sorry, all the Bible parables have non-specific subjects like… a sower and the soils; then unmerciful servant; the workers of the vineyard; two sons; the good Samaritan; and on. None ‘others’ have proper names. This is a true story, told by Jesus himself.

The NT true believer… has the hope, when ‘he or she’ dies; that their spirit is ‘immediately’ with Jesus in Heaven! But the unbeliever has ‘the assurance’ from the Word of God; that they will be in ‘Torment’, till the Great Judgment of all mankind. The True Believer will be judged and rewarded for their good works; and the unbeliever will suffer eternal ‘punishment’ … according to their evil works. God, the God of the Bible… will do so has He has promised in His Word.

IF you have ‘Never’… read these Bible verses before, you had ‘better take heed!’ The mercy and the grace of God, is ‘only’ available to you, while you are alive. You alone, make the choice for eternal life or eternal torment. Your Preacher, your Rabbi or your Priest or your Minister; will not be there before Christ Jesus, to defend your belief. You ‘alone’… are responsible for your acceptance of the Word of God… ‘or’… for your rejection, of the same!