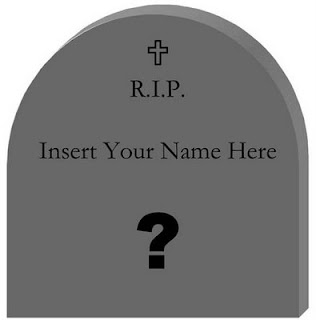 
Continuing this discussion… it is my hope that you have been looking at what God, the God of the Bible says about… ‘your’ earthly end. As previously said, “One cannot live properly, till they are ready to die!” Will you ever have to say, “I wish I could have settled that matter before?” Is there someone you are ‘not right’ with… before Christ Jesus; and you have set aside, because you did not want to deal with… ‘Those Issues’? A clear conscience will ‘allow’ this and ‘not allow’, the fear of death to consume you.

Perhaps for a ‘moment’… step back in your mind and visit how you felt during the “9-11” terrorist attack on the United States. Churches were filled to overflowing, with unbelievers, thinking the end of days, was upon us. For the over 3,000 killed and their remaining family members, this ‘terror’ lives with most. Only when one; has the assurance of “Eternal Life”; can they overcome such a tragedy. Once again, you cannot live properly, till you have made peace with… “Peace with God!”

“Short Accounts”… is the way to live in peace, no matter what happens. My parents and grandparents lived though the ‘Great Depression’. Some others survived, while many others perished. Some learned lesions about finances and some did ‘not’. The last two generations, now a days; have made themselves… “Slaves to Credit”. “They spend monies they do not have = for things they do not need = things which ‘do not’ =bring peace of satisfaction.” Say it isn’t so…?

The Funeral… that you have attended or will attend soon; will surely put all things in the right perspective. The ‘finality’ of death, will hit you either ‘unexpected’… or, with preparation. That choice is yours and belongs to no one else. There is no such thing as… “Hand me down Faith in God!” Each and every one of us, will stand before Him, and will give an account. Your pastor, your spouse, your father or mother or anyone else… ‘Will Not’… give an account of “Your Decision for Jesus!” That is for you and… you ‘alone’ to make.

Hell is just… the ‘temporary’ stopping place before, the Eternal Lake of Fire. It was not intended for mankind but for the devil and his angels. Yes it is for… those fallen angels, who with Satan, were in ‘rebellion’ against God. Someone said to me, “I don’t believe all that stuff, ‘religion’ and all their trappings!” Well, I don’t either! I simply believe what God, said in His Word, the Bible. ‘Religion’… is nothing more than man’s ‘attempt’, to circumvent what God has already, in His Word. Why do you think, that there so ‘very many’… denominations…?

Religion always ‘hates’… the Holy Word of God; the Bible. Those disciples of Jesus, left off from, the words of Spirit and Life… and returned to their Religion! So is it today, some 2,000 years later. People have their… ‘Religion’ …or their ‘Church’ …or their ‘Denomination’… and do ‘not’ want… what the Bible says. Many times while posting on the internet, people will get angry, because they think that I speak badly, about their religion or church. How can I do that… when I only share… what GOD has ‘already’ said in His Word… the Bible? Who do you believe… some church, or… “God and His Word?”

*** (Romans 10:3) For they, = being [willingly] ignorant = of God's righteousness = and = going about = to establish their own righteousness, = have ‘not’ submitted = themselves = to the righteousness of God.

When presented with the Word of God… it is your choice to believe Him… or your Church. It is just that simple. With care and in great introspection, you fill out your income taxes, knowing the government will hold, ‘you’ responsible. How much more, the God of All Creation, will He hold you to the… “Complete Authority” = of His Word?” Your pastor, priest or rabbi… will not be able to defend ‘your’ decisions; about ‘your’ religion. Will they…? If you think they can, perhaps get… ‘A Note’… from them, and show it to GOD, when you stand before Him…? Yes, that was an exaggeration to make a point, a hyperbole

Please tell me that… You believe the “Word of God”, over what your Church or Denomination? Do you ‘not’ realize… that it is a matter… of ‘eternal’ life or ‘eternal’ death? What you believe about Jesus, Who He is and What He has done; is the most important! Jesus himself gave His… ‘promise & warning’… in the above Bible verses. There are only two choices, to believe Him… or Not…?

Call upon Him… Today… before... Your ‘Funeral’!