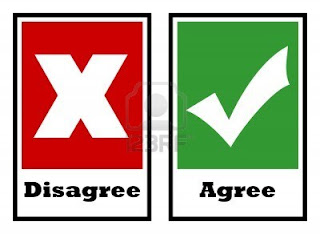 Have You ever had someone say to You… “Let’s Agree: to Disagree”…? That is plain & simple: “Manipulation!” They were “Not Honest” with You! I find that those, who call themselves Christian: will often use that ‘False Argument!’ When…? Simply when You present to them: What God says in His Holy Word: The Bible! Don’t they realize that Christ Jesus will… “Judge Us ALL: with His Holy Word”…? When we stand before Him, will He… “Agree to Disagree”…? Absolutely NOT…! His Holy Word is the “Absolute Truth” and ‘Finite’ mankind will Not be able to disagree with HIM…! Somehow they do Not want the Truth: nor be Confronted with the TRUTH! They simply want their own ‘beliefs’: even though those beliefs go against God & His Holy Truth…! They want You to accept Not only ‘Them’, but their ‘Lies Also’…! Say it isn’t So…?

*** (John 8:44) You belong to your father the Devil; and ‘You’ want to carry out the desires of your father. He was a murderer from the beginning; and has never stood by the Truth; since there is “No Truth” in him. Whenever he tells a Lie, he speaks in character; for he is a LIAR and the “Father of [all] LIES!”

Unless You hold to the Complete Authority… of the Holy Word of God: The Bible… even Christ Jesus would question your Salvation! [Matthew 7:21-22-23] He knew which of His many followers did Not: “Truly Believe Him”…! He sees their Heart Response to His Holy Word! Satan continually questions the validity of what God had told Adam & Eve, Genesis 3:1. His Agenda has Not changed, as he tries to get “You to Question”: God & His Holy Word…! Why do People: have “False Picture of Jesus”…? It is simply that: They are IGNORANT of: “Who” the Living Word truly is. Christ Jesus is the Living Word of God! They are IGNORANT of: the commands of His Holy Word about making: “Facsimiles & Idols!” Oh yes, for those who are IGNORANT: it simply means –> “Un Informed!” But, there are Some: who are “INTENTIONALLY IGNORANT”…! They really do Not what to take the Complete Authority of God: and His Holy Word…!

*** (Romans 1:20-21-22) For since the creation of the world His invisible attributes -> His eternal power and divine nature-have been understood and observed by what he made, so that people are “Without Excuse”. [Psalms 98:2-3!]
(Rom 1:21) For although they knew God; they neither glorified Him as God nor gave thanks to Him. Instead, their thoughts turned to ‘worthless’ things; and their ‘ignorant’ hearts were darkened.
(Rom 1:22) Though claiming to be wise: they became fools

*** (Jeremiah 48:10) Cursed is he who does the work of Jehovah the LORD deceitfully; and cursed is he who keeps back his sword from blood. [Ezekiel 3:18-to-21]
…
*** (Deuteronomy 4:15-16) Therefore take good heed to yourselves, for you saw no kind of likeness on the day Jehovah spoke to you in Horeb out of the midst of the fire,
(Deut 4:16) lest you act corruptly and make yourselves a graven image; the likeness of Any figure’ the likeness of MALE or FEMALE,

*** (Isaiah 5:20)  Woe to those who call evil good and good evil; who put darkness for light and light for darkness; who put bitter for sweet and sweet for bitter!

Agree to Disagree…? Do You really expect me from backing down in my Belief in the Complete Authority of His Holy Word…? To “Accommodate” your ‘False Beliefs’…? Really…? What kind of friend or acquaintance would I be… IF I was Not willing to: “Tell You God’s Absolute TRUTH”…? This entire world is under the control of Satan! But by the permissive will of God. God allows mankind to: “Harvest what he Plants”. Christians who are “Silent ‘About’ Abortion”: will simply “Blend Into” a society WHO: also “Hates God”…! Two states, Washington & Oregon, even permit Euthanasia: the murder of “Seniors” or the “Infirmed”. Much like Nazi Germany and their Agenda. And You ask me… “To Agree: To Disagree”…? Absolutely “NOT”…!

*** (Matthew 5:13) You are the SALT of the world. But if the Salt should lose its taste; how can it be made salty again? It's good for “Nothing” but to be thrown out and trampled on by people.

*** (Matthew 13:19) When anyone hears the word about the kingdom yet doesn't understand it; the evil one comes and snatches away what was sown in his heart. This is what was sown along the path.

*** (2John 1:9-10-11) Everyone transgressing and Not abiding in the doctrine of Christ; does Not have God. He who abides in the doctrine of Christ; he has Both the Father and the Son.
(2Jn 1:10) If ANYONE comes to you and does Not bring this doctrine; Do NOT receive him into your house; Nor speak a Greeting to him.
(2Jn 1:11) For he who Speaks a greeting to him; Is Partaker of his “EVIL” deeds.

Perhaps about Now… you are beginning to even question your own beliefs? Remember the contradiction about God’s Complete Authority & His Holy Word… comes from both “Within & Without!” Simply open your Bible and read what God says in… “2Corinthains 4:3-to-7 & Psalms 10:3-4 & Psalms 14:1-2-3]