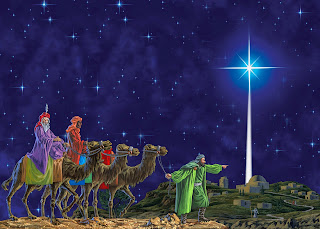 During this Christmas season… many of us remember the story of the ‘Star’ that led the wise men to Christ Jesus the Messiah. There has been a lot of ‘conjecture and speculation’ about the date of Christs’ birth and if the star was a real star or was it something else. The Bible is non- specific about these issues. Some religions’ worship the heavens and still others hold certain days or months… ‘Holy.’ I will only address what I believe was that thing which came to be called… ‘The Bethlehem Star’.

Some of the options… are that it was really a star. What happens is that with the ‘Celestial Navigation’ that a particular point on earth, would have to certain views different from another point some distance away. Alignment of those celestial bodies could in fact provide a ‘light reference point’… “But how did it move”…? Why then could it be seen by the ‘wise men’ and not others…? The shepherds who spend their lives in the field, did they not see the same star? If so, why then did the Angel of the Lord, announce to them the birth of the Messiah…?

Our human sight… is limited to the “Visible Light Spectrum”. Only after God opened the eyes of his servant, was he able to see… “Angels” and “Chariots of Fire.” When was the last time you saw these…? My point is that God allows… ‘some to see’ and… ‘some not to see’. It was the same way after Christ Jesus was raised from the dead. Some of the disciples spoke with Him, not knowing who he was. Yes even the Pharisees and Scribes did not know that Christ Jesus was the messiah. Spiritual Blindness is upon all of mankind till they come to Christ…!

Both of these… experiences could someone refer to, as a miracle. These miraculous actions were to keep some things secret and some things revealed… ‘only to those to whom’… they were … “to be revealed to”. Almost like the analogy of… ‘money’… some can handle it responsibly, but most cannot. The ‘Special Truth’… that comes from God’s Word, will be obeyed by some, but most will not. They have ‘no’ intention of following the commands of Scripture. They are only interested… in their own wants and desires... only to their own personal gain.

About now… someone is wondering what do, these principles have to do with the Truth about the ‘Bethlehem Star?’ God’s Holy Spirit indwells each “True” believer. But there are many that just celebrate Christmas without wanting to understand the Truth… about the Promised Messiah! He was born to die and rise again… for the “Sin/Sins”… of ungrateful mankind. That Savior came from the line of Gods’ chosen people, the Jews. So today, the hatred for the Jew comes from those... that do not want the “Jesus the Messiah”… to rule over them.

There were TWO… Bethlehem’s in Israel. Of course the Scriptures differentiated which of the two that Christ Jesus would be born in. But just how long did the… ‘Bethlehem Star’… remain visible, there over Mary & Joseph…? Did no one else see this ‘Star?’ If it was a heavenly star, did it just disappear after leading the ‘wise men’ to… Christ Jesus the Messiah…? Did no one else, see this star…? Something this “bright and moving”, surely would have been seen… by others? Yet the Scriptures are silent about this information.

May I simply say… that it is my belief, that the ‘Bethlehem Star’ was not a Star at all…? Have you ever thought about what it may be…? If it was not a heavenly body, what then has that “Light” in order to direct men, to find the Messiah…? Sorry no, I am not claiming to have any special revelation from God or from the Bible. But perhaps, you will listen to what I think about this… ‘Bethlehem Star?’ I do not believe that it was a star, but it was the… “Shekhina Glory of God…!

In all these Instances… it is the “Glory of God”… that Moses and Saul [Paul] saw. Moses had to in fact keep his face covered till that ‘Glory’ went away. The “Fear of God” was in that ‘Glory’ that shone. So too, it is my belief that the ‘Bethlehem Star’ was in fact… the “Glory of God”. Some could not see it, just as Elisha servant could not see the angels and chariots of fire. Just as those disciples of Jesus did not recognize Him as He talked with them on the way. Even Mary thought Jesus to be the Gardener. [John 20:13-to-18] Perhaps some more of the Glory of God…?

Why did these Angelic Beings… cover their Faces? Was it because of the Glory of God that shone…? Yes, God does let some see Him but some cannot. The Glory of God cannot be seen by mortal man except by His divine appointment. But in the New Heaven and the New Earth there will be… “No Sun!” So where will the Light come from…? Could this light… be the “Glory of God”…? I do not believe that it was a star, but it was the… “Shekhina Glory of God…!

Now what do you think…? Was it really a star or was it something else…? Simply allow the Scriptures to speak to you and not the ‘traditions’ that you have been taught. Oh yes, nowhere in the Bible do you ever read about… ‘angels singing.’ Remember the Christmas song, “Hark the herald angels sing…?” Perhaps it is about time that we… return to the Word of God…? If you want to continue with your traditions, that is your choice. But I simply seriously ask you to consider… IF the Bethlehem Star…. Was in Fact… “The SHEKHINA Glory of God”…?