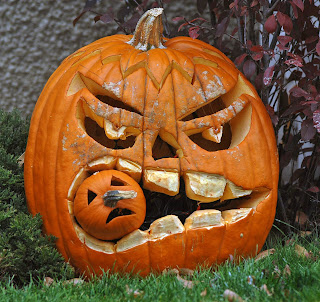 Perhaps ‘now’ is the time… for me to address this issue? First, I would like to address, those of you, who do not believe that you know God or even call yourself a Christian. Then I would address those of you… who say you are Christians and… “Celebrate Halloween.” Many want and will take ‘any’ reason to party and celebrate. But what exactly are you celebrating when you… participate in Halloween activities and celebrations…?


This celebration of Halloween… is a mixture of “Celtic Samhain philosophy” and that of a ‘Pseudo’- Christian holiday, ‘all saints day’. In the Bible there is “No Celebration” called, ‘all saints day.’ It was made up by a Pseudo Christian ‘Pagan’ Church. Today in America and in other countries this has become ‘Big Business’. “Kids”… from toddlers to ‘grown’ adults, dress up and are… ‘Lured by Candy’… into silliness. Those that are… “Child Predators”… take advantage of this celebration to the fullest extent. It is often… ‘kept quiet’… by the news media.

Most states have… ‘On Line’ resources, where you can go and see where the… “Child Predators”… have their residences and in ‘what’ neighborhoods. How many ‘reside’ in your area… that you “do not” know about…? Sending your children out, without checking these facts first… is allowing your child to ‘Possibly be molested’. “Fun for Candy”… has taken on a new meaning. ‘Really’… do you want your children going into ‘these kinds’ of neighborhood…?

There are those too… who as I have said will use ‘any’ excuse to party. Do you celebrate Halloween… “not knowing”… what you are ‘really’ celebrating? As adults, most take on a persona, with which they ‘validate’ themselves. They learn this as children, ‘dressing up’ and ‘roll playing’. Perhaps a ‘secure home situation’ would relieve most of this negative, social pressure. Of course, you know that ‘some’ still use… “Make-up and hair dyes”… to go out into daily life. Could that be called… “Daily Halloween”… too…? …LOL! …LOL!


Of course you all know… Hollywood has for a long time, has taken advantage of Halloween for their profit. TV programs as early as ‘Bewitched’ titillated the American public. Other programs such as “The Adams Family” were ‘spoofs’… making fun of those who believe in “Monsters and Goblins”… that go bump in the night. Programs that made fun of the Occult practices, are no longer seen, as they have been ‘replaced with’ a more serious and detrimental subterfuge of our thinking processes. They are forced into main stream cultural programs on the TV and in Videos.


Even more serious… are those “Disney” programs that have brainwashed ‘your’ children into readily accepting… any kind of supernatural magic and spells. Charmed, Buffy the Vampire Slayer, Rosemary’s Baby, the Omen and on and on and on. The Occult is more accepted than “any” Christian Teaching in our decadent society. So many, take the attitude… “It’s just a movie and entertainment.” What they do not realize is that this kind of thinking… is a gateway… to the Occult. “Ouija boards” and other practices are so common that they can be found at… ‘Garage sales.’


Today ‘many’ make fun… ‘with’ the occult, thinking nothing of it. It is as serious as the “Illegal Drugs” sold everywhere in American towns and cities. It is as harmful to the ‘soul’… as illegal drugs… are to the body. I can remember my grandmother, knocking over the salt shaker and getting a pinch of the spill and throwing it over her shoulder. As a child I asked her why? Many cultures have such… ‘Superstitions’… that are really part of the Occult. Even saying… “Good Luck”… is an Occult practice. “Las Vegas” has made itself rich… getting people to wrongly believe in… “Lady Luck!”


How about the Horoscope…? Do you really believe that the stars and planets… influence your daily life? I remember reading the ‘New York Times’… “retraction” about putting the wrong horoscope inserts with the wrong days. Do you suppose… anyone’s life… was better or worse… with the wrong data…? How about… “Fortune Cookies?” Someone in advertizing even put the Lottery Numbers… in those fortunes. I have never heard of anyone… using a Fortune Cookie… to win the Lottery… have you…?

Now, ‘How about’… hearing what God has to say in “His Word”, The Bible about the Occult? I will share with you examples from both “the OT & the NT”. Seriously, Christ Jesus cast out demons, that afflicted both… ‘adults and children’. Do you really want to dabble with the Occult and it unseen power “to corrupt” those that ‘invite in’… the black arts? Many do not believe in … “God and His Authority”… yet they will entrap themselves… in the Occult and demons.

Can it be made… any more ‘Clear’… what “NOT” to do…? But of course, most of those that say they are Christians do not… ‘Read & Study’… the Word of God. How then would they know ‘what’ or ‘what not’… to do…? IF you say that you… ‘Know Jesus’… and have never done so… how about starting… “Now?” It is never too late to start… ‘Obeying the Word of God.’ Maybe even in something as simple as… ‘Not celebrating Halloween?’

There have been Churches… who openly ‘do not’ celebrate Halloween, but have changed its name to ‘Harvest Party.’ They even allow their children to dress up as Bible characters… but they still allow pumpkins and make sure their kids… ‘get candy and goodies.’ Just “Who”… are they trying to Fool? “Surely… not God?” Changing the name and keeping all the same activities… is still Celebrating Halloween! About now, there are some that will stop reading. They will call me ‘legalistic’ and tell me that I am trying to ruin their… “fun?” Since when is… calling one… to obedience to God and… His Word… ‘Wrong?’ ‘Absolutely’… “Never!”

This Example is here… as a ‘warning’ for all those that play with the Occult and then think that they can simply, have ‘power and authority’ over the demons. No one… that is “Not” Born Again… by “God’s Holy Spirit”… has “any authority”… over the forces of darkness. Perhaps you have dabbled with the Occult in a fun way, thinking that it is no big deal. Suppose you want to try it… just as Sceva’s seven sons did…? Perhaps you should read those verses… ‘Again?’ Really, how about ‘you’ stopping… your wrong occult practices… “Confess and forsake them!”

About now… someone is saying… But we have already been to ‘Wal-Mart’… and bought the candy and costumes for our children. And besides… you know they are only children… and we don’t want to spoil… their fun! May I please… ‘ask’ you? Is what you call… “Fun”… worth disobeying God and what He has said in His Word…? I hear someone saying… that is just OT and not really for the Church. Oh is that so? The “10-Commandments”… are OT and so are the Psalms and… you use them! Just for “You”… once again… this is what “GOD” said…!

You may hear… very little from ‘the pulpit’ of your church against Halloween and “What God has said in His Word”… the Bible... about it. It is up to ‘You’…! “IF”… Jehovah is God… Follow HIM…? But if Halloween is your “god [small-g]… then follow the demons.