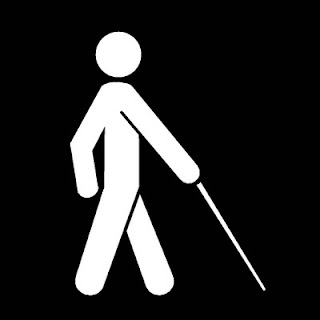 “Blindness – 101”…Blog.
Have you ever been… ‘Blind?’ Once when I was in the workplace I got a piece of metal in my eye and was temporally blinded in that eye. Besides the potentially sight crippling injury, I had ‘terrors’ about… going through life with only ‘one’ eye. After being taken to the doctor and the removal of the metal piece, I had to keep my eye patched for two more days. It was only temporary and… I thankfully… regained my sight in that eye.
Most of us… take our vision for granted. I had “20-10” vision almost all my life, with is better than the normal “20-20” vision. But as I aged, my eyes suffered from “Presbyopia” as we all do as we age. Corrective lenses are often needed… to refocus what we see… onto our optic nerves in the back of our eyes. Some choose glasses, some contact lenses and some “Surgery”… that has had some dubious results.
Did you ever… think what it would be like to be Blind? I have a friend who is a ‘Seminole Indian’ who was born blind. He graduated from Stetson Law School, as an attorney for the Seminole Indian Tribe. He did not allow his disability to keep him from becoming an attorney. Some years later, he was shot and killed in a dispute. How low does a human being have to stoop …to kill a blind person?
http://www.afb.org/Section.asp?SectionID=1&TopicID=129
Do you know about… Helen Keller? She was not only ‘Blind’ but ‘Deaf’ also. Perhaps you saw the movie about her life staring Patty Duke, “The Miracle Worker?” Her life is a series of accomplishments that go way beyond anything that we would experience. Her books are well worth reading… if you would like a break from… Entertainment TV or Videos. She even wrote in longhand.
http://www.youtube.com/watch?v=152-fG-7lgg
http://en.wikipedia.org/wiki/Blind_men_and_an_elephant
In the above story… there is a “Life Lesson” that may be learned through this parody of “Seven Blind men and an Elephant”. You see each of us has preconceived ‘ideas and concepts’ that we have learned… as we grew up. When I was a child we celebrated ‘Christmas’, but a Jewish friend of mine celebrated ‘Hanukkah’. He got presents for 7-days, while I only got a few on Christmas! …LOL!
So too in life… we are ‘Blinded’ to the world about us. Most complain about, ‘What they don’t Have’… while others in this land and overseas often have… very little. If you have ever traveled to Mexico City and gone out to see the “Mayan Pyramids” you have to drive through the Slum area. The poverty there is so bad that they have to drive in a truck with ‘potable water’… with armed guards. Many of those people exist on less than $60 Mexican Dollars a year.
We often Choose… ‘Blindness instead of Sight’. When was the last time you saw someone doing something wrong… and did Not say anything? You may say… ‘It’s none of my business!’ In the news you may often hear of someone on their Cell with the “9-11” operator reporting an accident. That is taking an ‘active role’… instead of the passive one. Still others only have time for themselves and not for others.
Last week… I was in Wal-Mart shopping. Have you ever shopped when there was a ‘Kid Screaming’, that they wanted ‘Fruit Loops’… and their mother would not buy it for them? As I went down the aisle I simply said… “Excuse me little girl, there is ‘NO Screaming’ aloud in Wal-Mart!” She immediately became quiet. Her mother took the Cheerios and placed them in the basket and whispered… ‘Thank You!’
Did you know… that ‘Most’ are “Blinded” to the Truth of the Bible? Well… ‘It is just another book’… you may say! That just demonstrates… “Your Blindness” to… The Spiritual Truth. Say it isn’t so? Why would so “Very Many” be against… “The Bible”… IF… it is just a book and ‘nothing’ more? Do you hate ‘Orange Elephants?’ Of course not… because there is no such thing!
(2Corinthians 4:3-4) So if = our gospel is hidden, = it is veiled to those = who are dying.
(2Cor 4:4) In their case, = the god of this world [Satan] = has blinded = the minds of those = who do not believe = to keep them from seeing = the light = of the glorious gospel = of Christ, = Who is = the image of God.

Satan has Blinded… your ‘mind and heart’ to the… “Glory of God and the Truth of His Word”, The Bible! How can that be? Because God said so in His Word… and He God… Cannot Lie! Each of us have been given some… ‘Spiritual Light’ and ‘Awakening’. What we have done with that “Spiritual Information”… determines your amount of… ‘Spiritual Blindness’.

You have ‘Either’… Rejected it and did not want any more …‘OR’… you have Accepted it and… are looking for more!

Well I go to Church… may be your reply! I am a good person! I don’t do wrong and I pay my taxes. None of that will make you in… ‘Right Standing’ with God, the God of the Bible! Do you meet all ‘His Standards?’ Do you even read His Word… to learn more of Him and what He has for your Life? You eat bodily food daily… but do you take ‘Spiritual Food’… for your ‘soul’… from God’s Word… “Daily?”

Do Criminals seek the Police…? Absolutely ‘Not’… as they want to commit more crimes! So it is with the… ‘Spiritually Blind’… they do not want “God’s Truth” found in His Word, The Bible. But for those seeking “The Truth”… more ‘Truth and Light’… will be revealed to them. Did you catch the “Key”… in the above verses… Matt 13:12? Those rejecting the Light… will Lose the very Light given them!

Well I may believe… ‘Some of what you say’… but I am not “Spiritually Blind!” You know I go to church twice a week! Perhaps then may I ask…? How much time do you spend in God’s Word, The Bible… ‘Reading His Word’… and… ‘Obeying His Word?’ Well I am so busy with Church and its activities… I just don’t have time! Get this… you have time for Church… but “Not”… For GOD’S ‘Word?’ Something is very, WRONG…!

I have been told… that I have gone ‘to medaling’… by posting blogs like this. Well may I simply say that I care for your ‘Spiritual Condition!’ We all live in a world that… “Is Not Getting Better, but Worse!” If you and I are to survive in this climate of “Spiritual Darkness”… we need more light from God’s Word, the Bible.

Isn’t it about time… that you ‘Made some Time’… for God in His Word? Try substituting some TV Time… to spend some time in God’s Word... “Alone!” He will reveal Himself… Only to those… that are looking for Him! What would you trade in this temporal world for… “Spiritual Light?” You can find that Light… in His Word! Or would you instead… keep your Spiritual Blindness?