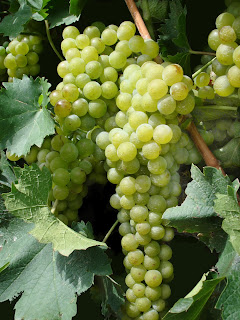 “Grapes – 101”
Yesterday I went… to Wal-Mart shopping and looking for Grapes. I really enjoy grapes as that is a ‘Fruit’… that comes in so very many ‘Flavors & Types’. As our world is becoming a Global Community, Grapes are available year around. One can even have dried grapes which are called Raisins. I particularly do not care for them as I prefer… the fresh fruit.
(Son 2:15) Take us = the foxes, = the little foxes = that spoil = the vines; = for our vines = have = tender grapes.

Do you know… what this Bible Verse is about? How can foxes spoil grape vines? Throughout the Bible there are… ‘Word Pictures’… as God communicated with His People through life lessons in an Agrarian society. That is in a ‘Produce’ community and not in a ‘Manufacturing’ or ‘Service’ industries, such as we have today. First… what are the “Grapes?”
(Isaiah 5:1-to-7) Now I will sing to my Beloved = a song of my Beloved = concerning = His vineyard. = My Beloved has a vineyard = in a very fruitful hill.
(Isa 5:2) And He fenced it, = and gathered out the stones of it, = and planted it = with choice vines, = and built a tower in its midst, = and hewed out a wine vat in it; = and He = looked for it to produce grapes. = And it produced wild grapes.
(Isa 5:3) And now, = O people of Jerusalem, = and men of Judah, = please judge = between Me = and My vineyard.
(Isa 5:4) What more could have been done to my vineyard = that I have not done in it? = Who knows? = I looked for it to yield grapes, = but it yielded = rotten grapes.
(Isa 5:5) And now I will tell you what I will do to My vineyard; I will take away its hedge, and it shall be eaten up; and break down its wall, and it shall be trampled down;
(Isa 5:6) and I will lay it waste; = it shall not be pruned nor dug; = but briers and thorns shall come up. = And I will command the clouds = that they rain no rain on it.
(Isa 5:7) For the vineyard = of Jehovah of Hosts = is the house of Israel, = and the men of Judah = His pleasant plant; = and He = looked for justice, = but behold = bloody iniquity; = for righteousness, = but behold a cry!

God’s Chosen People… Israel are His Chosen Vine. He gave them “His Law, Statutes, Ordinances” and All the instruction they needed to be His People. And yet they rebelled against Him – God… even when He sent prophets to warn them of the impending Disasters. Chastening is what “God” promised them… “Blessing for doing Good” and “Cursing for doing Evil!”

In the New Testament… Christ Jesus referred to Himself as the Vine and God as the Vinedresser. Christ Jesus is of the, ‘Human Lineage of David’ and… the “Promised ONE”… on the Throne of David… “The Eternal King of Kings and Lord of Lords!” He will rule His People throughout Eternity. We can only produce… “Fruit”… as we abide in the “Vine!”

There is 'NO'… goodness or righteousness within ourselves. The Only Good in us… is that of Christ Jesus and His Grace working in our Lives. Those that think that they are… good on their own… are mistaken. Worse than that… they are deluded into thinking that they are something that they are not. Could it be as ‘some’ are of the… “False Vine”… and not of the… “True Vine?”

Here is where the Lie… starts. God never said that ‘Adam & Eve’ could not eat of every tree! He said ‘Only’ of the tree of the “Knowledge of Good & Evil”… you shall ‘Not’ eat! Questioning the… “Absolute Authority of Jehovah God”… is the underlying plan for all of Satan’s work. His next plan is to replace it… “With a LIE!”

God’s intent was Never… for mankind to know about evil. This fascination about evil had led mankind ‘to follow’ after it. Even the TV shows are explicit about it, let alone the Movies. Who really ‘needs or wants’… to know about a “Serial Killer” or a “Child Molester” or even the perversion of Pornography? Surely it “Cannot”… do the ‘Family or Society’… “Any Good!”

The Truth of the Word of God… will be challenged by those that do not want God or His Word, the Bible… hold them “Responsible!” They want “License”… to do what they want without any consequences. Our jail facilities are being filled to overflowing with… “Lifetime Criminals”… who will never be released. Doing away with the ‘Death Penalty’ has only contributed to… an increase in crime.

Did You know “Obfuscation”… is simply another… ‘Legal Word’… for “A Lie!” Even our language has been changed to accommodate… “Lies!” The word ‘Homosexual’… has been replaced with the word ‘gay.’ The Killing of Innocent Babies in their Mother’s Womb… has been called ‘Choice?’ Choice for Who? Surely not for the “Innocent Baby”… that was ‘Killed’… by its ‘Mother?’ All these Lies… are to turn society against… “The Truth that comes from God!”

How about You… do you readily accept the Lies? Would you do so from your Doctor or Pharmacist or even your Banking Institution? Certainly Not! Why then do you so readily accept… The Lies… when they pertain to Society and “Right & Wrong? Perhaps it is because “God is not your Father?” Well who then… is your father? May I suggest ‘Who’… as the ‘Word’ does?

Pretty hard words… for those, who are apt to… ‘Stretch the Truth [Lie]’. Could it be that you have become so very comfortable with “Lies”… that you cannot even discern… ‘The Truth?” A simple test is the… “10-Commandments!” You shall not… “Murder, Commit Adultery [Sexual Sins], Steal, Lie or Covet! Pretty simple isn’t it? Or how about “God”… do you love Him with all your heart, mind and soul… to tell the Truth in ‘every situation?’ Can you be ‘Honest’ for once?

Thanks for Your EAR! Roger //Email// roger459@gmail.com