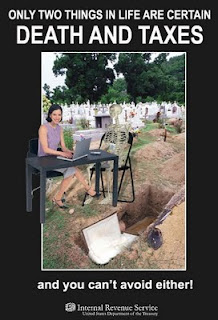 “Death & Taxes – 101”…Blog.
“All = that is necessary = for = the triumph of evil = is that = good people = do nothing.” …British Statesman, Edmund Burke.
As America and its freedoms… are ‘vanishing’ and becoming much like the… “European Socialistic Model”… we will see an increase of “All Taxes”… on all of its citizens. Much of Europe already pays upwards of… ‘40% or more’ of earned income = for their tax base. The sovereignty of our “American” freedoms are slowly being eroded by… “President Obama and his ‘SOCIALISTIC’… “Give-A-Way Bail Outs”… and… ‘Proposed’ = Health Care Programs”.
http://www.youtube.com/watch?v=bLJxmJZXgNI
Why do you think… that there are over… “25-million illegal aliens”… Living here in the USA? As other nations with… ‘Universal Health Care’… are experiencing; the illegals are overwhelming their socialized health care systems. Perhaps if, our government would publish these facts about America, we would ‘not’ have to find them on… “Fox News” & “You Tube?” What are they hiding… Anyway?
Health Care… at least, the… “1,600 page proposal”… and the ‘Democratic Party’ push… cannot be sustained by the current, “Tax base in place!” Out national and foreign debts have exceeded over… “14,000,000,000-Trillion dollars!” And the interest being paid is ‘Over’… “1,000,000,000-Trillion dollars a year! That debt cannot even… be paid off with our GNP… or even the… “New Taxes” … that will be levied on the American Taxpayer… “Very Soon!”
(Deuteronomy 8:17-18) and = so that you = might not say = in your heart, = My power = and = the might of my hand = has gotten me = this wealth.
(Deut 8:18) But you shall remember = Jehovah your God, = for it is = He = who gives you = power to get wealth, = so that = He = may confirm = His covenant = which = He = has sworn to your fathers, = as it is today.

So too ‘Christ Jesus’… paid taxes to the very government… that was to crucify Him. He, being God incarnate… paid taxes as they were part of the ‘Occupational’ government of His times. We pay taxes… to our American Government… even though they… “Squander the Monies”… on useless projects and expenditures. A lot of our ‘Foreign Aid’… goes to [our]… the enemies of freedom and democracy.
Do you have a ‘Land Line’ Phone…? How about a ‘Cell’…? Have you ever looked at the… miscellaneous Taxes… on those bills? Much of it is… ‘Extra hidden chargers’… that you are not, told about… nor are they provided for, by Law. Much of it comes from elected or appointed boards, which levy taxes… without the Laws… mandating such fallacious taxing. Still you and I pay and pay and pay… without so much of a protest! Oh yes, I am not… ‘A Slave’… to a Cell!
http://www.youtube.com/watch?v=oj-GkDJpr2Y
Today many remember… “9-11”. Much has been one in the name of… ‘National Security’… as still there are terrorist groups, being funded by their governments taxes. All sorts of taxes have been expended on “Elite Security Innovations”… and still, Americans consume over… “5,000,000,000-Trillion dollars of… “Illegal Drugs!” What is wrong with that picture? We cannot even control the… “Illegal Drug Trade”… within our very boarders, how then do we control the Terrorists?
http://www.youtube.com/watch?v=OS2fI2p9iVs
All these Tax Monies… are ‘Wasted’ because there is… “NO – Accountability!” The GAO continually published reports about the wasted expenditures… and Nothing Ever Changes! There are voices speaking out and are kept ‘hidden’… out of the main stream media. If all Americans, would have this… “Debt Threat”… in plain view, what would be their… responses?
It is my belief… that the Judgment of God, the God of the Bible… is upon America! Say it isn’t so…? How then could an elected government… be so wasteful and make such decision that are causing… Long Term Harm… to our nation? These ‘wrong and stupid’ decisions are without… logic and without… sound and prudent financial principles.
http://www.youtube.com/watch?v=wOR1wUqvJS4
(Genesis 4:8-to-11) And Cain = talked with = his brother Abel. = And it happened = when they were in the field, = Cain rose up = against his brother = Abel = and = killed him.
(Gen 4:9) And = Jehovah = said unto Cain, = Where is your brother Abel? = And = he said, = I do not know [Lie!]. = Am I = my brother's = keeper?
(Gen 4:10) And = He [God]= said, = What have you done? = The voice = of your brother's = blood = cries to Me [God] = from the ground.
(Gen 4:11) And now = you are cursed = more than the ground = which opened its mouth = to receive = your brother's blood = from = your hand.

So today here in America… there have been… “Over = 50,000,000 –Million”… Innocent Babies… Killed in their Mother’s Womb… by Abortion!” Able’s blood… ‘Cried out to GOD’… about his ‘murder’ by his brother Cain. So it is Too… Today! The “Blood”… of those Murdered Innocent Babies… cries out to God… Against Our Nation! We are even… Exporting Abortion… to other nations and funding them!

This is a hard subject… for me to speak about without at least once… breaking down and Crying… Out Loud…! If this does NOT… touch your heart… Then… you are not human. Innocent Babies… being Murdered… for What…? For the convenience of the… “Irresponsible”… man [boy] or woman [girl]… who chose… “Death for the Baby… that… God Gave for Life..?” You too… Who… take that morning after pill… are as Guilty. No one escapes… the judgment of God…!
(Ecclesiastes 12:13-14) Let us hear the conclusion of the whole matter. Fear God, and keep His commandments. For this is the whole duty of man.
(Eccl 12:14) For God shall bring every work into judgment, with every secret thing, whether it is good, or whether evil.