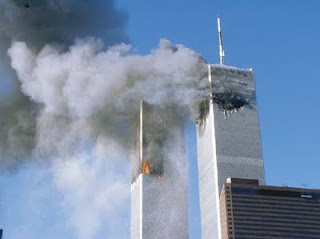 “Unbelievable ‘Terror’ & 9-11”…Blog.
This week Americans… and the world will remember the fatalities from the “Islamic Terrorists” attack upon the ‘Twin Trade Towers’ in New York City… “September 11, 2001”. This attack also included a plane attack at the Pentagon in Washing DC. Another attempted attack was defeated by the airplane passengers, ‘heroically’ storming the cabin and defeating the terrorists. The plane crashed in the country side of Virginia … missing its intended target.
http://www.youtube.com/watch?v=oj-GkDJpr2Y
The many were killed…? ‘About “3,017”… were a result of the ‘International’ hatred that they have against our country and its freedoms. Unlike any other nation, we at one time had freedoms that the other nations could only ‘dream about’. Surely God, the God of the Bible has blessed our “Undeserving Nation”… like none other. We have escaped ‘World Wars’ on our soil and the devastation that comes for such wars… as experienced in Europe and Asia.
I was in Indianapolis Indiana… on a business trip, when the ‘9-11’ attack occurred. The ‘Red Cross’ called for blood donations and they had to turn people away because so many donated. Did you know that Human Blood can… “Only be stored for 30-days?” That which was not used… was sold to the ‘plasma’ companies for their use and research. This happened all over the USA.
That Friday I had… to drive back to Florida, in my rental car… as most airline flights were grounded. Even the traffic on the interstates was almost non-existent. Our nation was experiencing… “A ‘Terror’ = never before given = to our nation!” That Sunday… churches filled to overflowing… with people that never before attended. Have you ever wondered… “Why?”
There were Donations… and fund raisers all over the country for the… “Victims of 9-11!” Many organizations were making collections and with… “No Accounting and Reporting of those Funds!” There was over… “One Billion Dollars”… collected and yet the victim’s compensation was only about… “1.2 million dollars each!” What happened to the Remaining Monies? Where is the ‘investigations’ that were suppose to have followed this… “Theft of a Collected Billion Dollar’s?” …?
I flew the next week… on business. The Atlanta airport, was all but deserted. when I made my connection through there. It was almost three-months before I started seeing… ‘children’… flying with their parents. Still there was… “The Terror”… that you could feel in the air = like static electricity. Immediate security procedures were put in place and there appeared to be a concerted effort… ‘Not to let this happen again!’
Do you remember the… “National Guard Troupes”… that you could see at every airport? They were there in ‘Uniform’… All carrying their… “M16’S”… Ready for Action! Extra Law enforcement officers were at the airports too. In conversation with one, we discussed the crisis. He had served in the military as I did and we had a kindred spirit about the issue. He told me… “Those National Guard Troupes… DO ‘NOT’ Have ‘AMMUNITION’…!” Ever wonder… Why?
Everywhere there seemed to be… ‘an assurance’ that things were getting under control. American Flags could be seen almost everywhere! Even the “ACLU”… did not protest when any ‘Elected’ officials… “Even Prayed In Public!” The “Terror of Terrorism”… had come to the shores of America! We, for the first time, nationally experienced… what the rest of the world had been living with for centuries.
Within Two Years… what seemed a tragedy was ‘glibly’ spoken about. Our American society was returning to its ‘decadent’ self. “Abortion Clinics” were up to their usual business of… “Killing Babies in their Mother’s Womb!” ‘Alcohol sales’ were at an all time ‘high’. The business community and the stock market slowly started its recovery. Most had all but forgotten Again… “About GOD!” …and the ‘Terrorist Attack!’
Those that went to Church… due to the… ‘Terror of 9-11’… soon forgot “God”. As I had served in South East Asia… I remember about some having… ‘Foxhole Conversions!’ They went something like this… “Oh GOD = we are being attacked, by a force. that will destroy us”. = “If you will deliver me… I will follow You and be Good = Amen!” Most that prayed like that… never followed their promise… to God.
So it was… with the ‘Many’… terrorized by the… “9-11 Terrorist Attack on the United States of America!” Their promise to GOD… was a way they thought to… “CYA”… nothing more, nothing less! Did they really believe that they could… “Live against GOD, all their lives”… and HE would help them in this… “9-11 Crisis?” In reality, this is factually called… ‘intent to defraud’. Simply “DUPLICITY” = saying one thing and then ultimately doing the opposite.
(Jeremiah 12:5) If = you have run = with footmen, = and = they wore you out, = then = how can you = compete with horses? = And if you feel secure = in the land of peace, = then how will you do = in the swelling of the Jordan?

IF our nation… were to be attacked today, we would have the same response as we did form “9-11!” They feel secure in a time of ‘Supposed Peace’. Yet the ‘terror of terrorism’… still looms in the minds and hearts of all… who have traveled by air… since “The 9-11 Terrorist Attacks. Some have refused to ‘Fly!’ The week following ‘9-11’… Delta airlines removed the ‘Stainless Steel’ knives and replace them with… ‘plastic ones.’ Yet they still served you a stainless steel… ‘Fork!’
Just… ‘Who’… are you in Fear of? Just perhaps this saying comes to your mind? “Out of Sight… Out of Mind!” Most have fears, that they ‘never’ speak about. Most fears are based on… “One’s inability to deal with reality!” What can ‘you’ personally do about… “A Terrorist Attach?” Just so you don’t become complacent… “There are ‘terrorists’ arrested today, that you will not hear about ‘in or through’ the Media!” Fear is Real… when you don’t have a position to stand on.
(Matthew 10:28) Stop = being afraid = of those = who kill the body = but = can't = kill the soul. = Instead, = be afraid = of the One [God] = Who can destroy = both body = and = soul in hell.

This seems pretty straight forward… doesn’t it? IF…You say you ‘Love God’… THEN… you will keep His Word! Those that do not really love Him… want nothing to do with Him and His Word, the Bible! The only time they are… ‘remotely interested in Him’… is to save them from the ‘Terror of Terrorism’… and its results. The only time they will come to Him… is to get something to pleasure themselves…! Sorry… “God”… is not Santa Clause!

Does that seem… pretty tough and straight forward? Well I cannot and will not… “Lie to You”… about GOD and His Word! How or what kind of friend would I be… if I were to not give you All the Truth about God and His Word… the Bible? Not a friend at all… ‘but an enemy’… of the same type as the “Terrorist”…! In reality, I want to share with you… the Love of God through Christ Jesus by telling you the Truth, the whole Truth and nothing but the Truth!

Once Again… Do you fear the “Terrorists”… more than you… “Love and Fear God?” If you do, then you have a misplaced… ‘loyalty and allegiance.’ “In God we trust”… is on your money; but how many really… “Trust in God”… for their “Present and Eternal Safekeeping..?” The same God who has promised… “Eternal Life” for those that are ‘really’ His… is the same God… Who will keep you in the “Present”…!

If you have read this… all the way through and do not “Know God” as your “Keeper and Sustainer”… for now and for eternity, perhaps now is the time? I will not try and “Scare You”… into making a decision for Him. That has to be… “your choice”… by your free will! I simply ask you to consider… how much He has done already…?