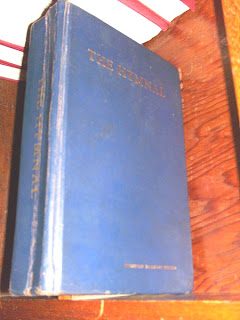 Recently I came across… a site on ‘Face Book’, called “Anointed Music”. As I viewed some of the music posted I became concerned that it sends the ‘Wrong Message’. I also have a “You Tube” account and there seems to be the same mentality there. But I remember when Church songs that had a ‘definite message’. Now a day’s… one can hardly tell the difference between them and… ‘Rock Music.’
(1John 2:27) But = the Anointing = which you received = from Him = abides in you, = and = you do not need anyone to teach you. = But as = His Anointing = teaches you concerning all things, = and is True = and no Lie, = and as He has taught you, = abide in Him.

The NT Believer… has this ‘Anointing’ or ‘Sealing [2Cor 2:22]’ forever. The OT believer… lost this ‘Anointing’… when he chose to disobey “God”… as King Saul did. Many today cannot distinguish between the… “Anointing of God”… and just plain ‘human talent’. When one performs with ‘feeling and bravado’… some equate that to that ‘Anointing’ that is of the Holy Spirit. It is “Not”…!

If it is called… “Anointed”… does it mean that the… “Words and Lyrics”… are given to the writer by “God”…” And are they, on the same… “Level & Authority”… as the Bible? About now… there are some that will not finish this Blog. I simply ask you to open your Bible… to any of the ‘Psalms’. That was the “Hymn Book”… of the “Real Anointed Music”… sung by Israel, God’s chosen peoples. Read “Any One” of them as they are… “Anointed!”

(2Timothy 3:16) All Scripture is = God-breathed, = and = is profitable = for doctrine, = for reproof, = for correction, = for instruction = in righteousness,

This is “Anointed”… 'The Scriptures'! But to say that… ‘Anointed Music’… is Anointed… is just plain Wrong! About now… you will ask yourself… “Is that True…?”

To help you understand... what I am saying, perhaps the next time you go to Church… look at one of the “Old Hymnals” that used to be used? While visiting a church, I happened by an open supply closet and found a supply of those old Hymnals. That Church had removed them from the pews and replaced congregational singing with their… ‘Live Entertainment’… of contemporary music.
When I attended… Public School, they read the Bible every morning over the PA system. Now a day’s… if someone carries a “Bible” in ‘Public School’… they are treated as a “Leper”. So today the Modern Church… has moved away from… “Truth in Music”… and substituted… Entertainment Music. The songs are missing… “Doctrine”… and have substituted the same few sentences… repeated over and over again.
(Judges 21:25) In those days = there was no king in Israel. = Every man = did the right = in his own eyes.

So today… as Church attendance dwindles, they have ‘Switched Over’ to contemporary music to make it more palatable to the ‘unthinking and unknowing’. Say it isn’t so? Society has changed so very much so that the “Leave it to Beaver” program seems antiquated. The moral climate has changed so very much… so you now see… ‘SEX’ going on between unmarried… ‘Domestic Partners’. This is ‘delivered’ into your ‘Home’ and shown to your ‘Children’… on the “TV & Videos!”

All Music is a Sermon…! The words are what conveys… “The Message!” It is as simple as the “Rap”… where the Gangster emulates the Wrong and says… “Kill all the Cops!” This justification mentality has even crept into the Churches. The clothing of the “Church Choir”… where they wore ‘Choir Robes’… has been replaced with the “Latest Fashion” for those presenting the ‘music’. I have seen women singing on the platform with… “Less than Covering Clothing!”

Simply Compare… these two songs!
The Original song… “A mighty fortress is our God”... by Martin Luther, “1853”.

http://www.cyberhymnal.org/htm/m/i/mightyfo.htm
A mighty fortress is our God, a bulwark never failing;Our helper He, amid the flood of mortal ills prevailing:For still our ancient foe doth seek to work us woe;His craft and power are great, and, armed with cruel hate,On earth is not his equal.
Did we in our own strength confide, our striving would be losing;Were not the right Man on our side, the Man of God’s own choosing:Dost ask who that may be? Christ Jesus, it is He;Lord Sabaoth, His Name, from age to age the same,And He must win the battle.
And though this world, with devils filled, should threaten to undo us,We will not fear, for God hath willed His truth to triumph through us:The Prince of Darkness grim, we tremble not for him;His rage we can endure, for lo, his doom is sure,One little word shall fell him.
That word above all earthly powers, no thanks to them, abideth;The Spirit and the gifts are ours through Him Who with us sideth:Let goods and kindred go, this mortal life also;The body they may kill: God’s truth abideth still,His kingdom is forever.
************************************************************