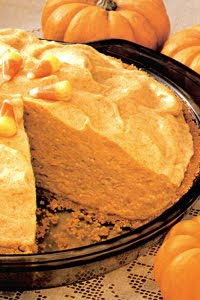 Before Thanksgiving Day… I often make two for practice. My mother made this type and growing up I never had any of the regular pumpkin pie till I went into the service. I have since radically changed the original recipe… to make it my own. This procedure will walk you through the process and you too can enjoy this holiday pie. Incidentally, I make and enjoy this kind of pie… all year long. Please completely read through this entire recipe… “FIRST”… before attempting it.

Purchase the ‘Two’ pack of… Mrs. Smith Deep Dish pie shells from your local grocery store. I bake these, piercing the shell several times with a fork after they thaw for about a half hour. I cool them on a cake rack for about a half hour till cool and then place them in the refrigerator to cool completely, before I place the filling mixture in them. “IF” you make your own pie shells from scratch you may do so as I used to do. But now I simply use the Mrs. Smith ones!

Take two packs… of know unflavored ‘gelatin’ and dissolve them into a two cup contained… ‘one’ cup of ice cold water. Stir till congealed and set aside. This will be added to the cooked pumpkin mix later. This will add the body needed to stiffen the pumpkin and chiffon mix.

Take 6 – Ex-large eggs… and separate the ‘whites’ from the ‘yokes’. Set aside the ‘whites’ into a ‘Large’ mixing bowl. Later on you will ‘beat’ on high, with an electric mixer. You may also do this in a large ‘copper’ bowl with a ‘Wisk’. Too much work for me, so I switched back to the electric mixer. To these “Whites”…you will add ‘one–teaspoon’ of… “Cream of tartar” and… a ‘pinch’ of salt. Set aside a cup of white sugar to be added into these ‘egg–whites’, before whipping into a chiffon.

In a lager pot… 4 – quarts or larger place all the yokes from the ‘Six Eggs’. Add one large can of pumpkin and a cup of white sugar. Add ‘one–teaspoon’ of vanilla and… ‘one-half’ – teaspoon of ginger powder, but you may use the fresh ground if you choose. Add ‘one–teaspoon’ of ground nutmeg to this mix and mix thoroughly. Then bring this mix to a boil for one minute and remove from the heat. Add in the ‘gelatin’ previously set aside and bring back to a boil for an instant only. Set aside this cooked mixture to cool. I often do this in my sink with a few inches of water, stirring occasionally. “DO”… this cooling procedure at least ‘twice’, as it will have to be cool to the touch before adding it to… the beaten egg whites.

Take the egg ‘whites’… previously set aside and place the mixer on high. Make ‘sure’ that you have added the ‘cream of tartar’ and the ‘pinch of salt’. Beat till the whites for about one to two minutes, while slowly ‘incorporating’ the cup of white sugar… ‘So –slowly’. These whites should peak in about four or five minutes. When these ‘peak’ and all the sugar has been added, they are then ready to blend. NOTE: “IF” you have ‘never’ whipped egg whites before, you ‘should’ practice in another bowl with two egg whites, so you can gauge when the practice whites ‘peak’.

Only ‘Fold–In’ [No Stirring]… the completely ‘cooled’ pumpkin mix into the bowl of the beaten egg whites. Remember I said beat these in a… “Large Mixing Bowl”… as the cooked pumpkin mix will be… “GENTLY FOLDED INTO”… the chiffon. Do not mix this as it will… ‘Deflate the peaked egg whites’.

Remove the cooled… pie shells and gently pour this ‘mix of pumpkin and chiffon’… into them. I always use the Mrs. Smiths… ‘Deep Dish’… pie shells. This mound of pumpkin mix will deflate some during the cooling process. These pies… “MUST”… be cooled at least four hours. I often make these pies the day before. In addition I only cut each pie… into SIX pieces. Anything less and you might be… ‘Lynched by an angry Mob!’

11. Ability, Aptitude and Willingness… to try something different.

ONCE Again… please read and understand all the procedures before attempting this procedures. It is important that one has the aptitude to do this. Remember that this recipe may be altered to decrease the amount of sugar… for those having diabetic problems. You may even substitute a ‘sugar substitute’ if the need is medically required.

Perhaps while you are… reading through this recipe, you may think on several things…?