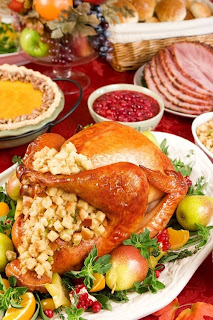 This week… many Americans will celebrate this National Holiday. The Canadians celebrated their Thanksgiving day back in October. I remember the first time I did ‘not’ celebrate Thanksgiving. I was in the service overseas and even though the “Mess Hall had Turkeys”… it was not the same. This holiday is often the major holiday of the year. But what about Christmas? The ‘Office or Workplace’ Christmas Parties have become an excuse for License and Drinking. Hardly reflective of the real Christmas.


Most ‘do not’ know the real story… about Thanksgiving celebrated by the Capt. John Smith and the Plymouth Plantation. Many that came to this ‘new country’… did so to escape persecution brought about by… the Catholic and the Church of England. I remember reading this in my public school history book. The history books of today… reflect ‘Political Correctness’… and leave out these ‘important’ facts. Our American history has been dumb down… to remove… any thought of God working in our history.

I have both lived… and worked overseas… and know firsthand some of the conditions of ‘Others’ living in those areas. We here in America can get a drink of “Clean Drinking Water” almost anytime we want. We have food and housing and many things we take for granted. Most Americans… “Are NOT Thankful”… for what they have. They seem to what… more and better… and do not know what they really have.

Many ‘never’ think… about being “Thankful to God” for all we have here. The Entertainment industry has so filled our minds with the “Part” attitude that all we can think about is… “More of this or that. Few are thankful for their Houses, Cars or even their Families. Most are looking for better houses, better cars and those material things… that really are nothing but vanity.

As you enjoy your Thanksgiving… remember to “Really be Thankful”… for what you have. Most of us will have produce on out tables. But have you even though about the… “Migrant Farm Laborers”… that picked that produce? Their jobs are temporary… often moving from area to are to… Pick that Produce… that you are eating every day. Many have families… that will not be sitting down… to even have ‘such a bounty’… as you have on your table.


God, the God of the Bible… has blessed our nation America… unlike any modern nation. He has been steadily withdrawing His blessing on our nation. Why…? Perhaps it is because our “Apathy”… towards and for the “Innocent Unborn”… “WHO are Killed”… in their “Mother’s Womb by Abortion”. So too, we have two states, Washington and Oregon… that have ‘Assisted Suicide.’ If we, as a nation do not care for the ‘Unborn’ and our ‘Elders’… what does that say about… “US?” A nation of nothing more than… ‘wild animals’… parading around as humans?

Those of us… that know Him, each and every day are thankful that we have been delivered from the Penalty and the Power of “Sin/Sins!” Those that ‘do not’ know Him… live in the “Pretending”… that He does not exist. Too soon, the reality of eternity will come upon them, without any remedy. If you ‘do not’… know Him… perhaps you should not let this issue continue… before you eat that, ‘Thanksgiving Dinner?’

God has provided Salvation… through the Finished Atonement… of Christ Jesus the Messiah. When you reject this provision for your “Sin/Sins”… it simply demonstrates… “Your Un-Thankfulness!” What more can I say to you? You have already heard it before. I would simply remind you of the “Terror” you had during the… “9-11” Terrorist Attack… on our country. Your… “Rejection” of God and His Provision… to pay in full for all your “Sin/Sins”… will last in and throughout… “Eternity, in the Lake of Fire!”

Perhaps during this Day… “Thanksgiving Day”… will not be so good… if you have been Un-Thankful to God and His provision for your Salvation in Christ Jesus. Remember God gave you… Free Will… to choose or not to choose… to Love & Serve… Him. God is Love and God is Holy. Your rejection of Him… will be your choice alone. You will “Never” be able to blame Him for your rejection of Him.

Have a good Thanksgiving Day…!