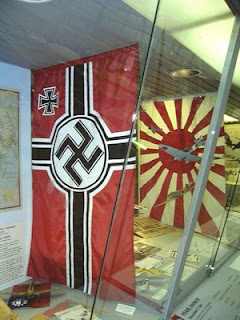 “Defection – 101”
Have you ever… ‘Defected?’ Well no, you might answer, what do you think I am, a spy or a traitor? But of course not… ‘defection’… can be from one’s diet! …LOL! One can ‘Defect’ from their way of thinking and actions. When sports figures are traded to another team, we do not call them ‘Defectors’. Yet they change their allegiance, usually for… ‘Monies and Position!’ Yet, there were baseball players in… the ‘60’s’… who remained faithful to their team and would not be traded!
http://en.wikipedia.org/wiki/Benedict_Arnold
In early American History… there were traitors that ‘Defected’ from this country such as Benedict Arnold. But during any history, there have always been spies and those that were unfaithful to their nation, country and heritage. They ‘Defected’ from their citizenship to the harm of their country and peoples.
http://en.wikipedia.org/wiki/Atomic_secrets
During the development… and production of the Atomic Bomb, there were both ‘American’ and ‘British’ citizens that disseminated “The Secrets” to the Russians. This helped them to assemble and produce their own Nuclear weapons, in essence, they ‘Defected’ these secrets, to their enemies of their own countries. An now we complain... because Iran and China ...have nuclear weapons…?
http://www.religioustolerance.org/chr_dira.htm
In a recent… study it was stated that… “There are more divorces among those that claim to be Christians, than among those that are Not Churched!” There are numerous other studies that have come to the same conclusions. Does that surprise you? Over half of the marriages end in divorce. ‘Wedding vows’ and ‘Church marriages’ do not prevent one from ‘defecting’ from their mate. Most of the time, it will only simply reveal… ‘The intent to defraud that was already there!’
Most of us… know about ‘Judas’, who… ‘Defected’… and betrayed, “Christ Jesus” and sold Him for… ‘30 pieces of silver’… only himself, later to commit suicide. This defection is the worst of all history. So also does the Bible tell of others… ‘Demas’… who claimed to be Christian and then later defected. There are other defections listed in other Scriptures.
(Colossians 4:14) Luke, the beloved physician, = and Demas, greet you.

(2Timothy 4:10) For Demas, = having fallen in love with this present world, = has abandoned me = and has gone to Thessalonica. = Crescens has gone to Galatia, and Titus to Dalmatia.

(James 4:4) You adulterers! = Don't you know = that friendship with the world = means hostility with God? = So whoever wants to be a friend of this world = is an enemy of God.

So what is it… that causes a person to Defect? They simply made a decision on emotion or mind and not that of… ‘The Heart!’ And when I say heart… I do not mean that ‘organ or libido’ that many mistake for the heart. It is the real you… ‘the heart’… that will be revealed in its… “True Nature”… by your actions. The tests of life… simply come to reveal the… “True Defections!”

Today ‘Many’ people… have learned to over look… ‘Defections’… as part of that wrong… ‘Political Correctness.’ We make ‘Excuses’ for one another and their… “Deviant or anti-social behavior”… except when it affects us directly. Those, ‘Catholic priests’ and ‘Michael Jackson’ and their accusations of ‘child molestation’ were simply… “Excused Away!” The “out of court million dollar settlements”… simply proved the… ‘Defections!’

That’s pretty hard… you may say to me. No, it is simply factual! Again, the ‘Defection’… from acceptable social behavior is the real issue. “Right and Wrong”… seem to have taken a vacation from the American Thinking of… “One Nation (not) under God”… as stated on our money.

How about those… that SAY, they are Christians? Are there ‘Defections’ spoken about in the Bible, the Word of God? But of course! Again the “tests of life”… only reveal… what is already there! Play acting has been part and parcel of life everywhere on earth. If we wore our ‘True Nature’… on the outside… all would immediately see us for what we are!

(1Timothy 4:1) Now the Spirit says clearly = that in the last times = some people will abandon the faith [Defections] = by following deceitful spirits, = the teachings of demons,
(1Tim 4:2) and = the hypocrisy of liars, = whose consciences = have been burned by a hot iron.

"Christ Jesus"… came to save Sinners… for ‘All have Sinned’ and come short of the Righteousness of God! Will you today… “Examine your life”… and see your need for Him? Please feel free to contact me about this.